In summary, our research group works on proteins contributing to cell polarity, on the gene regulatory network involved in egg cell specification, and on proteins acting on the cell surface during male-female gamete interactions.

To address questions related to our research topics we establish protocols to isolate living gametes from different flowering plant species. We perform transcriptomics and proteomics to identify candidate genes and proteins that are subsequently tested in functional studies.

Currently, we are investigating the molecular function of a small protein family that participates in the establishment and maintenance of cell polarity by characterizing specific interaction partners. Furthermore, we study RNAs and proteins putatively involved in egg cell specification, and characterize cell surface proteins which are involved in gamete adhesion, gamete activation, or fusion.

We are analyzing our transcriptome data sets with the aim to discover uncharacterized gamete-specific or early fertilization-induced mRNAs, as well as small and long noncoding RNAs. We identified, for example, transcripts specifically present in the egg cell and/or the central cell and transcripts specifically induced in zygotes and two-celled proembryos (Chen et al., 2017; Leljac-Levanic et al., 2013; Sprunck et al., 2012; Juranic et al., 2012; Sprunck et al., 2005). Currently, we investigate the molecular function of selected candidate genes/gene families participating in the establishment of cell polarity, in gamete specification, and in gamete interactions during double fertilization. 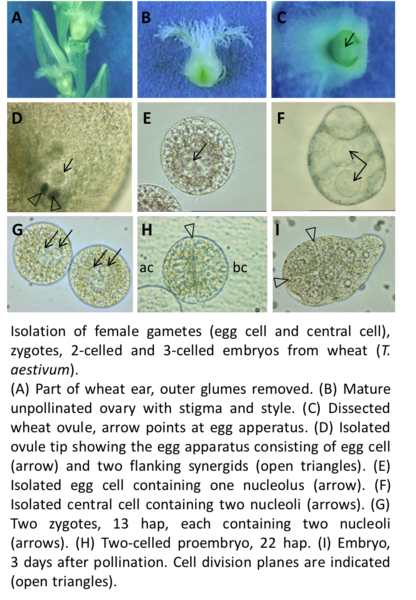 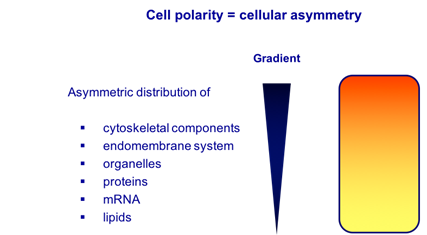 Polarization and asymmetrical growth in eukaryotic cells require elaborate regulation of a variety of cellular processes, including spatially restricted signaling, reorganization of the cytoskeleton, and polarized membrane trafficking.

To study the establishment and maintenance of cell polarity in flowering plants we use the following Arabidopsis model cells: pollen tubes, root hairs, trichomes, egg cells/zygotes.

The pollen tube is among the fastest growing plant cells. It is widely used as a model cell to study tip growth.

The pollen grain germinates on the surface of the stigma and forms an elongating tube that navigates through the female tissues toward the ovule to deliver its two sperm cells for double fertilization. Like growth cones of axons, pollen tubes require a signaling network to recognize and interpret extracellular cues that determine the site and the direction of tip growth. 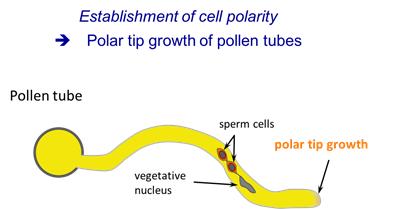 Within the past years, crucial molecular players of the pollen tube tip growth machinery have been identified, including a tip-focused calcium gradient, elaborate F-actin dynamics, tip-directed vesicle trafficking, and localized exocytosis. In our lab, we identified the Armadillo repeat protein ARMADILLO REPEAT ONLY 1 (ARO1) as a novel player of the pollen tube tip growth machinery (Gebert et al., 2008). Currently, we investigate the mechanistic function of ARO1 and related ARO protein family members in cell polarization.

2. Establishment of polarity in the egg cell

The egg cell and the zygote 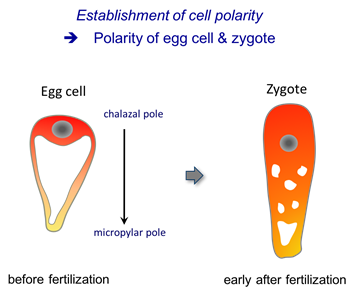 Immediately after fertilization, the vacuolar organization changes and the zygote nucleus is moved away from the chalazal pole. Live-cell imaging during the entire process of zygote polarization revealed that the preexisting alignment of microtubules and F-actin in the egg cell is lost on fertilization and that the rapidly elongating zygote reorients the cytoskeletons to perform directional cell elongation and polar nuclear migration (Kimata et al. 2016, PNAS 113, 14157-14162).

The first zygotic cell division is transverse and asymmetric, producing a smaller apical cell and a larger basal cell. The two daughter cells do not only differ in terms of their morphology but also in their developmental fate. The apical cell gives rise to the later embryo, while the basal cell mainly forms the extra-embryonic suspensor. 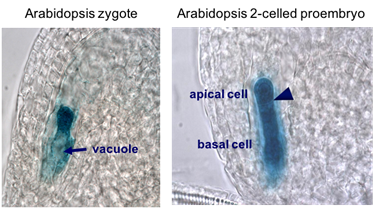 In order to identify novel players participating in the establishment of cell polarity in egg cells and pollen tubes, we performed transcriptomics approaches using isolated egg cells of wheat and Arabidopsis. We focused on uncharacterized (novel) transcripts present both in egg cell and in pollen tubes.
One of the first candidates chosen for functional analyses was a transcript encoding the Armadillo repeat protein ARMADILLO REPEAT ONLY 1 (TaARO1) and its putative ortholog in Arabidopsis (AtARO1).

ARO1 genes are specifically expressed in the pollen vegetative cell and the egg cell. In the Arabidopsis pollen tube, the AtARO1-GFP (green fluorescent protein) fusion protein localizes to vesicles, accumulating in the inverted cone-shaped region of the pollen tube tip (Vogler et al., 2015). Moreover, the accumulation of AtARO1-GFP in the pollen tube tip is sensitive to brefeldin A (BFA), a fungal metabolite that inhibits protein secretion. These observations support our hypothesis that the observed partial co-localization of AtARO1-GFP with F-actin in the shank of pollen tubes reflects the vesicle transport along longitudinal F-actin cables (Gebert et al., 2008). 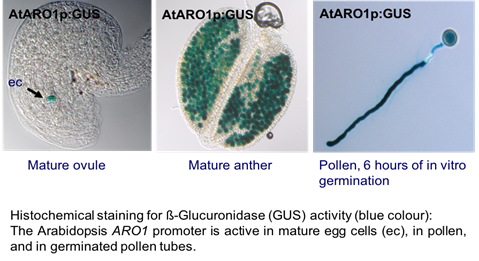 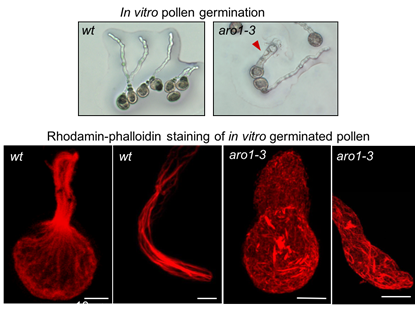 No phenotype was observed in egg cells, suggesting functional redundancy within the ARO family members. The role of ARO proteins for egg cell and/or zygote polarity is currently being analyzed in mutants where we knocked out the whole gene family.

The main aims and research questions of this project are: - How do the ARO proteins act on the molecular level? What other cellular components and proteins interact with ARO proteins? - Do we find similar phenotypes and interaction partners in egg cells/zygotes and pollen tubes, indicating that the molecular mechanisms of cell polarity formation in both cells follow the same paradigm?

Plant gametes are, in contrast with animal gametes, not direct products of meiosis but differentiate within multicellular haploid generations, the male and the female gametophytes. In flowering plants (angiosperms), the gametophytic generations are reduced to a few cells that are located within the diploid sporophytic tissues of the flower. 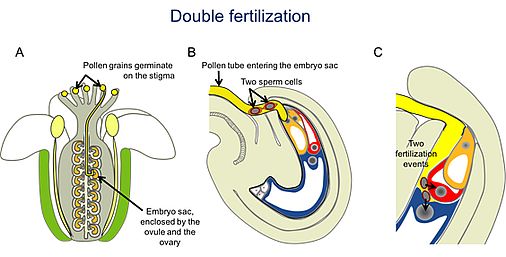 During double fertilization, the two non-motile sperm cells are transported as a pair by the growing pollen tube, which is guided through the style and the transmitting tract of the pistil to the ovule (A). Finally, the pollen tube grows through the micropyle of the ovule into the embryo sac (B), where two female gametes (egg cell and central cell) are located. After pollen tube burst, the sperm cell pair is released towards a cleft between the egg and central cell. One sperm cell fuses with the egg cell, while the second sperm cell fuses with the central cell (C), resulting in two distinct fertilization products: the embryo and the endosperm.

In contrast with the molecular events involved in guided pollen tube growth and sperm cell delivery into the female gametophyte, almost nothing is known about later processes, covering the phase from sperm cell release until gamete fusion (plasmogamy) (Sprunck, 2010). Within minutes after a sperm cell pair is delivered, each one of the sperm cells fuse with one of the female gametes to initiate seed development in a coordinated manner. Attempts to elucidate these issues at the cellular and molecular levels are hampered by the fact that angiosperm gamete interactions are short-lived events, taking place deeply embedded in the maternal tissues of the ovule and ovary.

Currently, these marker lines are used to study mutants that have been generated in our group, showing defects during double fertilization. 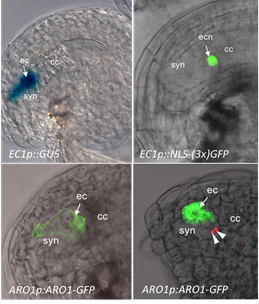 Male-female gamete recognition, adhesion, and fusion encompass the most intimate steps during fertilization. Nevertheless, the knowledge about molecules that act on the cell surface of flowering plant gametes is scarce.

Currently, we are analyzing our transcriptome and proteome data to identify more cell surface proteins which are involved in male-female gamete recognition, adhesion, and fusion.

The main aims and research questions of this project are:

- Which molecules on the cell surface of female and male gametes mediate gamete recognition, adhesion and fusion in flowering plants?

- How do the egg cell-secreted EC1 proteins act on the molecular level?

- Are there species-specific gamete interaction mechanisms in flowering plants?

We are using a wide range of basic and advanced methods related to (plant) molecular biology, molecular genetics, cell biology and protein biochemistry. 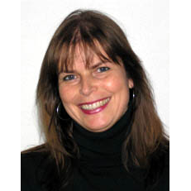