Symbiotic relationships are widespread in nature and a strong driving force in evolution. In insects, endosymbiotic bacteria often provide benefits in that they underlie the formation of novel traits and cause changes in physiology and metabolism of their hosts and may be essential for growth and reproduction of their hosts.

The recently completed sequencing, assembly and annotation of the C. obscurior genome (Schrader et al. 2014) revealed the presence of a new intracellular enterobacteriaceae symbiont, ‘Candidatus Westeberhardia cardiocondylae’. Westeberhardia is distantly related with a group of endosymbionts of other insects. Its highly degenerated genome has retained the shikimate pathway for synthesizing 4-hydroxyphenylpyruvate, a precursor of phenylalanine and tyrosine (Klein et al, 2015).

Westeberhardia cannot complete the last step of the shikimate pathway to synthesize tyrosine. However, both the genomes of the host and of a second endosymbiont, Wolbachia, code for tyrosine aminotransferase, which converts 4-hydroxyphenylpyruvate to tyrosine. Further conversion of tyrosine to DOPA (3,4-dihyroxyphenylalanine), an important component of the insect cuticula, might occur through one of several tyrosine 3-monooxygenases encoded in the host genome. Together with the increasing titers of Westeberhardia during pupal development from white (early) to brown (late) pupae, this suggests an important contribution of Westeberhardia to cuticle formation of developing ants (Klein et al. 2015). 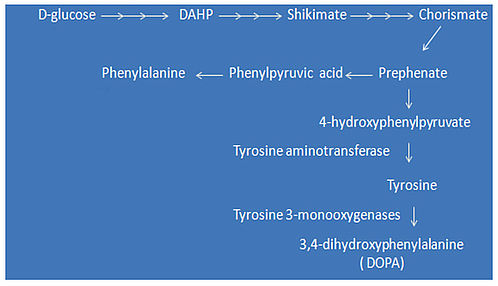 My project focuses on three aspects :

I am interested in the details of the symbiosis between C. obscurior and Westeberhardia. First, I aim to uncover the function of these pathways and their effect on the host phenotype. Second, I will investigate whether the symbiosis with Westeberhardia is indeed obligate and has benefits for the host by comparing the fitness of naturally infected strains with uninfected and “cured” strains. Third, I aim to understand the evolutionary history of this symbiosis with C. obscurior by tracing Westeberhardia across the Cardiocondyla phylogeny.