How do ant colonies exploit their environment? How do ant colonies react to a changing world? How do ant colonies as a whole make collective decisions, and how do individual ants make decisions? My research uses behavioural assays and agent-based modelling in order to answer these questions, by looking both at colony- and individual-level behaviour. A deeper understanding of ant decision making systems not only informs us about collective decision making in general, but may also be a source of inspiration for the next generation of decision-making algorithms and heuristics.

Some of my recent projects are:

Negative feedback in ant foraging systems
Ant collective decision making systems are characterised by positive feedback: one workers finds some food, she recruits more workers to the food, and they in turn recruit more workers. This allows colonies to make rapid and accurate collective decisions. However, such positive-feedback systems move rapidly towards local optima, where they can become trapped. For example, if an ant colony finds a poor food source and recruits heavily to it, it should not be able to switch to a newly discovered high quality food source, because the first pheromone trail is too strong. This seems maladaptive, and indeed this does not seem to be the case in the wild. How do ants avoid such traps? Previous work has described how ants can respond to strongly-used trails by reducing further pheromone deposition. Might this allow ants to avoid becoming trapped in poor decisions? Using agent-based models I am investigating this possibility. Preliminary results suggest that the answer is: yes (probably). Such negative feedback systems may also allow ants to avoid crowded paths, and choose paths with lower ant traffic. Using experiments with dummy ants – glass beads that smell like ants – I am investigating this possibility. Preliminary results suggest that the answer is no (probably), or at least, not in my study system. 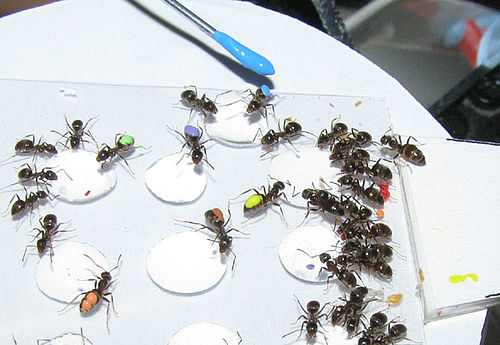 Composite decision making: ant memory plasticity, recruitment, and their synergy
Many ants famously use chemical markers – pheromone trails – to recruit nestmates to food sources. This has clear benefits, such as rapid exploitation of food sources. However, it also has some theoretical pitfalls, such as colonies becoming trapped in sub-optimal local optima. Many, perhaps most, ants also have a very good spatial memory, and are able to rapidly learn the location of a food source. How do the decisions of individual foragers relying on their memory and the colony level information sharing entailed by trail pheromone interact? While pheromone recruitment is quite well understood, how the memory of individual ants responds to a changing environment is less well studied. The first task in understanding how individual memories and collective recruitment interact is to understand how plastic an ant’s memory is. Once an ant has learned to find food in one place, how quickly can it learn when conditions have changed and food is now to be found in a new location? Experiments are currently underway. Once we know how ants act as individuals, we can use agent-based modelling and experiments to understand how individual memories and collective decision making interact.

funding
I would like to thank the Alexander von Humboldt foundation for generously funding my stay in Regensburg. 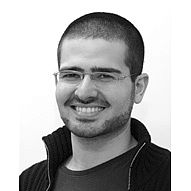