Gene expression can be initiated either in form of a transcriptional burst or occurs constitutively at a constant rate. Commonly, gene expression starts at one or multiple gene loci. Maturation of mRNA (splicing and modification) in a nucleus is followed by formation of an export-competent messenger ribonucleoprotein complex (mRNP), which is then exported to a cytoplasm. Once exported, mRNAs are either directly translated in the cytoplasm or are localized to specific sub-compartments of a cell, where translation occurs in a specific controlled manner. mRNA decay, the final phase of an mRNA, represents the ultimate mechanism controlling the available number of mRNAs in a cell. Multicellular organisms often rely on minimal changes in gene expression patterns to determine fate of a single cell. Therefore, mRNA regulation is crucial for cells to fine tune gene expression, as it allows both rapid and local changes in protein synthesis. mRNA localization, mRNA translation and mRNA stability are used for mRNA regulation and depend on regulatory RNA binding proteins (RBPs).

Using Arabidopsis as a model organism we have identified an unknown RBP which shows similarity to a well described ribosomal preservation factor essential for efficient mRNA translation start after cell arrest. Mutants of this protein show defects during gamete fusion indicating an important role of controlled mRNA translation during plant reproduction.

Furthermore, we have identified mRNAs which show distinct subcellular localization during embryo development. Currently, we try to identify biological relevance of these structures and try to unravel regulatory mechanisms behind them.

Pollen tube growth and guidance toward female gametes are controlled at various stages by chemotactic signals and growth support molecules. These are derived from sporophytic and gametophytic tissues of a female flower. Growth processes during plant fertilization can be divided into seven independent phases, each of which is characterized by a target growth in a newly defined direction. 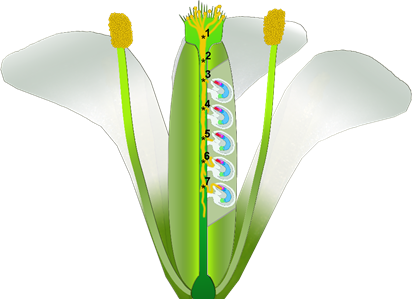 In the first phase pollen grains, placed on a stigma, stick to papilla cells and start to hydrate, which is followed by their germination and growth along papilla hair cells into a style center. Then, during the second phase, pollen tube grows through extracellular space of style cells towards and into a transmitting tract. If a pollen tube is close to an unfertilized ovule it can break through an epidermis of a transmitting track (phase three). Afterwards, in ovarium pollen tube grows along epidermis cells towards a funiculus (phase four) and, subsequently, along the funiculus (phase five). In close proximity to an ovule, pollen grows inside the micropylar opening (phase six) and along one of two synergid cells, until growth is arrested and the two sperm cells are released to a cell fusion site between egg and the central cells (phase seven). Afterwards, two sperm cells fuse with two female gametes (egg cell and central cell of a female gametophyte). In our group we are interested in different phases of pollen tube guidance and try to unravel underlying molecular mechanisms. 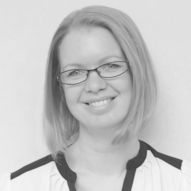