In contrast to animals in which meiotically competent cells develop in embryos, plants switch from vegetative to reproductive growth only during flowering. In maize, the most important cereal crop, the tassel contains male flowers in which pollen encasing the sperm develop in anthers.
During their life cycle, land plants generate new organs from distinct meristems, containing a set of undifferentiated stem cells. Throughout vegetative growth organs are generated primarily from the shoot apical meristem (SAM) and the root apical meristem (RAM).
Once the plant switches to reproductive growth the SAM is converted into the inflorescence meristem (IM). In maize, where male flowers are produced on a terminal tassel and separate female flowers arise in the axils of vegetative leaves, several intermediate types of axillary meristems between IM and FM are formed. During tassel development the IM in parallel initiates branch meristems (BM) with an indeterminate fate and spikelet pair meristems (SPM). SPMs subsequently divide into two spikelet meristems (SM). Each of those produces two glumes, initiates an upper FM and then converts itself into a lower FM.

Florets, contain four concentric whorls that are formed sequentially from the FM. First, the palea and the lemma are initiated followed by the lodicule, and three stamens and finally three carpels are formed. In maize tassel florets, carpels are aborted while the stamen continues to differentiate into a supporting filament and the anther. The anther primordium contains cells derived from the meristem layers – L1, and L2. The L1-derived (L1-d) epidermis surrounds the four anther lobes (L2-d) and the centrally located vasculature (L2-d). Within each anther lobe, a subset of L2-d cells specify into archesporial cells (AR). The remaining surrounding L2-d cells undergo multiple periclinal divisions to finally form three distinct layers - the endothecium, the middle layer and the tapetum. Once all lobe layers developed, the central AR differentiate into pollen mother cells (PMC), which then undergo meiosis I and II and a sequence of mitotic divisions, ultimately resulting in pollen formation.

Despite of their recognition as key players in defense, development, physiology, and cell-to-cell communication, only a few small secreted proteins have been discovered and functionally characterized in crop plants so far .
Recent proteomic and transcriptomic studies on different stages of maize male flower development implicate small proteins as coordinators of growth and cellular behavior from inception through meiosis to dispersal of mature pollen. These findings are bolstered by in-depth analysis of the small secreted protein MAC1 (multiple archesporial cells1) which is required for germline and somatic niche establishment.
Evidently, a correct organ-developmental program is also a prerequisite for the biotrophic corn smut fungus Ustilago maydis to successfully infect its host. These observations indicate that yet unexplored and functionally uncharacterized small secreted proteins play pivotal roles in male flower development and susceptibility to pathogens.
We aim to identify novel small apoplasmic proteins: candidate proteins are selected from proteomic data and are screened at the macroscopic, microscopic and molecular level to define their impact on development and pathogenicity using the recently established U. maydis-based Trojan horse strategy. Further protein characterization by biochemical and genetic approaches are used to elucidate interacting partners and to identify affected pathways. 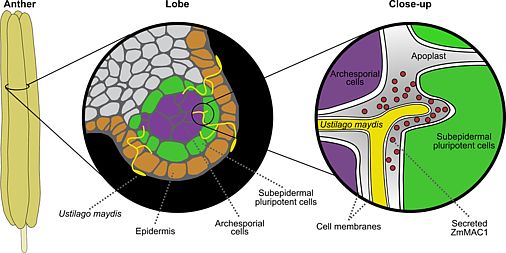 From pluripotency to germline initiation 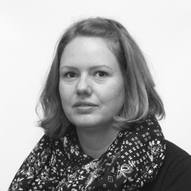