The sequencing of numerous bacterial genomes has led to the identification of a large number of unknown genes. The functional assignment of proteins encoded by these genes is an inherently difficult but important task for molecular biology. We focus on novel enzymes that are evolutionary related to well-studied model enzymes. Using a combination of computational biology, biochemistry and genetics, we want to provide insights into the evolution of novel enzymatic activities and to reveal previously unknown biosynthetic pathways.

Currently, we are working on the YbiB protein and the family of PcrB proteins. YbiB is structurally and evolutionary related to TrpD (anthranilate phosphoribosyltransferase) and the class II nucleoside phosphorylases. The ybiB gene is located in a LexA controlled operon (SOS response), and recently, we could show that YbiB binds to DNA and RNA with high affinity. However, its function is still unknown.

PcrB is a key enzyme in a novel biosynthetic pathway that produces acetylated ether lipids in Bacteria. Ether lipids have long been considered to be a unique feature of Archaea, because their membrane phospholipids are built from sn-glycerol-1-phosphate (G1P) with two ether-linked isoprenoids. In contrast, bacterial (and eucaryotic) phospholipids are based on sn-glycerol-3-phosphate (G3P) being esterified with two fatty acids. A key step in the synthesis of archaeal ether lipids is the stereo-specific transfer of the polyprenyl moiety from geranylgeranyl diphosphate (GGPP, 20 C atoms) to G1P, catalyzed by geranylgeranylglyceryl phosphate synthase (GGGPS). We could show that PcrB, an orthologue to GGGPS that occurs in bacteria, also synthesizes ether lipids, but is a heptaprenylglyceryl phosphate synthase (35 C atoms). PcrB and GGGPS share the frequently encountered (βα)8-barrel fold. Currently, we study the variability within the PcrB/GGGPS enzyme family with respect to structural features, catalytic activity and substrate specificity. Furthermore, we investigate how bacterial ether lipids are further processed by acetylation and what their biological relevance is. 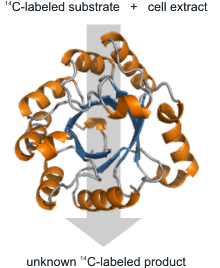 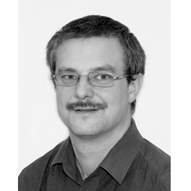