Professorship for the History of Science

Welcome to the Professorship for the History of Science. Today, there is no other form of knowledge as widely accepted and revered as science. At our unit, we try to understand how science, as a cultural and social phenomenon, got to be where it is today and how it might have been different in other times and places. We explore science, with its ideas, people, institutions, and sites, from a historical perspective. Fundamental to our explorations of science and its history are the ways certain ideas emerged as basic to it, such as ‘objectivity,’ ‘rationality,’ ‘standardization,’ ‘fact’, and ‘methodology.’ Of particular interest, moreover, are different practices that make up science, such as drawing, observing, experimenting, measuring, noting, collecting, traveling, publishing, and so on. These practices are avenues into the messy world of science in action, including the ways science is related to technology, politics, markets, and even empires. The paths we follow in these explorations lead us through texts and documents but also pictures and objects. As such, we learn how to historically treat diverse historical sources, including instruments, like those from our unique, in-house historical collection of scientific instruments. And although well-known names and technologies are vital to science’s history, we are just as interested in casting light on less well-known people, ideas, and things that also make up science; including women and non-Western people, invisible technicians and artists, but also things like pencils and paper or chairs and desks. All things considered, ours is a reflective and critical journey into the history of science and knowledge. 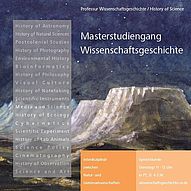