RNP biogenesis: assembly of ribosomes and non-ribosomal RNPs and control of their function 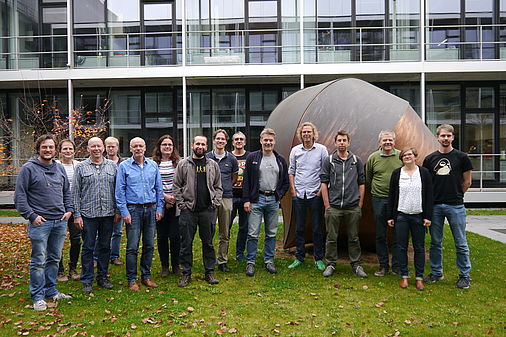 Proteins and ribonucleic acids associate to form a large number of macromolecular complexes (ribonucleoprotein complexes, RNPs) in all living cells. Many of them are acting together as crucial players in numerous biological networks. Consequently, impaired RNP formation and function are linked to cellular malfunction and disease. Accordingly, analyses of dynamic RNP-assembly processes and the regulation of RNP function have been central topics in basic research.

Formation and function of RNPs depend on the interplay of many RNA-producing or RNA-containing protein complexes. First, the regulated synthesis of the RNA component is critical for RNP formation and significantly influences RNA-maturation steps in space and time. Second, a functional network of many RNA-binding, RNA-modifying and RNA-folding complexes participates to mature emerging RNPs. Third, the interplay of different RNPs is essential for RNP activity, as exemplified by the regulation of ribosome activity, by microRNA-containing protein complexes (miRNPs), or regulation of transcription by long non-coding RNA (lncRNA) containing complexes.

In summary, our combined efforts will further the understanding of common principles, specific features and mechanisms of RNP assembly. Several high-resolution structures of RNPs related to the topic of this CRC became available during the last funding period. Structures like those of eukaryotic pre-ribosomal particles, RNA polymerase I initiation- and elongation-complexes, and miRNA containing RNPs have a major impact on the progress of several ongoing CRC-projects. The option to determine high-resolution structures of RNPs on-site and to synergistically combine these structural studies with biophysical, biochemical and cell biological approaches constitutes an excellent basis for our research that aims to understand and explore the structure-function relationships as well as mechanisms and dynamics in RNP biology.