Research Interests of the Korber Group

Here, we have prepared comprehensive material about the research interests of our group. For more informations, please contact Prof. Dr. Nikolaus Korber.

Ammonia NH₃ is a gas at room temperature, but it can be liquefied by cooling it below -33 °C. It is then a versatile solvent. Especially important is its stability against highly reducing agents like multiply charged anions or even free electrons. Many of the species studied in our group can be dissolved only in ammonia; examples are Sb₅⁵⁻, As₆⁴⁻, Si₉⁴⁻ or PbSe₃⁴⁻.

Often, the products crystallize from liquid ammonia as solvent-rich crystals, the so-called ammoniates. These easily emit ammonia and decompose frequently at temperatures above -20 °C. By employing special techniques, these crystals can be handled and characterized in a cooled environment under the exclusion of air. X-ray crystallography is our most important method.

In contrast to  O−H⋯O hydrogen bonding in water-containing solvent crystals, which are called hydrates, the analogous N−H⋯N hydrogen bonds in ammoniates have been scarcely studied. The purpose of our work is the preparation of crystals containing as much ammonia as possible ... more

At the border between sold state and solution

Up to now, the solution chemistry of homoatomic polyanions of group 14 is not yet fully understood because once in solution, the cluster anions undergo rearrangement reactions to some extent. These processes of solvated Zintl ions can be observed using NMR spectroscopy ... more

Homoatomic anions of main group elements are with good reason popular objects of fundamental research. With them, the different ways of joining atoms and basic aspects of non-polar covalent bonding can be studied especially well. Additionally, they are attractive preparative building blocks ... more

Chalkogenido metallates are attractive building blocks for the rational synthesis of inorganic frameworks by solution reactions. An important model is the rich structural chemistry of silicates, which derives from differently joined SiO₄ tetrahedra. We concentrate on those systems ... more 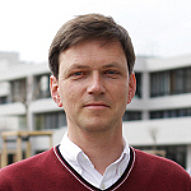