Amerikanistik/American Studies at Regensburg University explores the multiethnic and multilingual diversity of North American literatures and cultures in their regional, national, and global manifestations from precolonial times to the present.

The Regensburg American Studies program aims at a comprehensive understanding of North America, including both European and American perspectives.

Degree programs in American Studies at the University of Regensburg are interdisciplinary in scope, transnational in approach, and international in outreach. Courses explore the multiethnic and multilingual diversity of North American histories, politics, cultures, and literatures from early colonial times to the immediate present.

In a nationwide research rating by the German Council of Sciences and Humanities (Wissenschaftsrat) of December 2012, Regensburg's American Studies department achieved outstanding results and has established itself among the very best German research institutes in the field.

The Regensburg European American Forum (REAF) is the platform for scholarly exchange and research in American Studies. 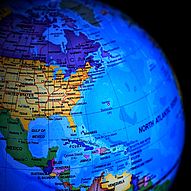