Born in 1964 Christoph Wagner studied art history, musicology and comparative cultural science at the universities of Saarbrücken, Munich and Vienna from 1983 till 1993. In 1989 he worked as a research assistant at the Bayerische Staatsgemäldesammlungen in Munich. He graduated in 1993 with a thesis on Raphael. In 2004 he qualified as professor with a research on sources of the Bauhaus. As a lecturer he worked in Saarbrücken as well as in Bern (CH) where he held a deputy professorship. Since 2007 he is head of the Chair of Art History at the University of Regensburg. Furthermore Christoph Wagner was Directeur d’études at the École pratique des Hautes Études (Sorbonne) in Paris (FR) in 2008, visiting professor at the Graduate School, Institute of Advanced Study in the Humanities and the Social Sciences in Bern (CH) in 2010 and at the Institutio de Investigaciones Estéticas, UNAM (MEX) in 2012. He joined the Elitenetzwerk Bayern in 2008 and supervises students of the Elite-Master programme Aisthesis. Christoph Wagner is elected member of Academia Europaea. The Academy of Europe (London) and the Bavarian American Academy (Munich). He is spokesman of the Sehen und Verstehen Alliance of the University of Regensburg. Between 2011 and 2013 he was dean of the faculty of philosophy, art, historical and social sciences. From 2013 until 2017 he has been Vice President of the University of Regensburg. 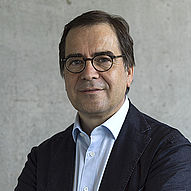