Miss-information, half-truths and fake news have received considerable attention in the media in recent times. Most of the research attention in this space has focused on social-media and how rumors and untruths are spread. However, false information can be spread in many ways.

Taking the refugee population as a case study, the aim of this project is to determine whether there are commonly held beliefs that are formed within refugee communities in Germany that are not true and understand how are these formed.

Titel: Information sharing / withholding amongst refugees - a study in the mould of Elfrede Chatman

Elfrede Chatman can be considered as one of the most influential information scientists. Her work studied information poverty and in particular she used ethnographical methods to understand the information landscape and behaviour of particular social groups, including university janitors, elderly women in care homes and the homeless. This project would continue her work to understand another underprivileged demographic - political refugees in Germany.

The refugee crisis has brought increasing numbers of refugees to Germany. When they arrive here they are encountered with many hurdles. How do things work? Where I can I stay? How long can I stay? Where can I get support? Cultural differences mean that the answers are often puzzling and all of this happens in a foreign language. This project will attempt to discover how refugees attempt to find answers to these kinds of questions. More specifically it will try to answer What kinds of information needs refugees have? What information resources do they have, which ones do they use hand how? What problems do they encounter?

Government health initiatives often try to encourage home cooking as a means to promote healthier diets [1,3]. Nevertheless past studies have shown that common sources of cooking inspiration, such as recipes published by celebrity chefs tend to be unhealthier in many ways [2]. These kinds of studies are typically based on very small hand picked samples. In Howard's work a sample of recipes from celebrity cookbooks with a small sample of ready meals from UK supermarkets. While such studies are insightful, they do not show the full picture.

This project would involve crawling data from the website http://www.mysupermarket.co.uk/ to determine a more accurate and complete dataset from which to investigate the healthiness of ready meals. When the dataset has been created data mining approaches can be employed to answer a number of questions, which previous studies have not yet been able to answer. These include:

Titel: Studying how online recipes are used in practice

Our recent work has demonstrated that users of online food portals generally prefer less healthy meals and their choices can be influenced by several factors including presentation, algorithms and personal preferences. That being said, just because online recipes are interacted with online does not mean that they are actually prepared and consumed by users. This project will investigate how online recipes are actually used in practice and more specifically, attempt to answer the following research questions:

The results are important not only because they help us understand people’s behaviour, but also to help us estimate to what extent interactions with online recipes can be seen as a proxy for eating a meal with particular nutritional content.

Although participating in sport is typically associated with a healthy lifestyle, many of the community sports clubs in Germany provide particularly unhealthy food to the members. This project would involve developing an online food ordering system allowing members to order their food in advance. Not only would this make life easier for both the members and the restaurant, it would also provide a platform to understand food recommendations and potential behavioural change.

Website / Search engine to communicate and explore the geographical trends in health statistics and how this relates to the online food recipes with which people in those regions interact.

This project will involve indexing online recipes to make them searchable and at the same time visualising the trends found in recent publication.
Here is an example of such a site as means of inspiration.

The content posted on social-media is extremely diverse, ranging from posts documenting personal activities to opinions and statements of facts. Some of these facts are mundane and undisputed whereas others are extremely controversial. The aim of this project is to identify controversial tweets posted by German politicians. The student will develop and test automatic methods of detection using a large collection of tweets collected by elected politicians in Germany, which is being collected as part of an i:imsk collaboration.

This will involve some technical and programming skills as well as knowledge of statistics.

There are increasing numbers of studies investigating the social-media behaviour of politicians. These have applied both qualitative and quantitative approaches, demonstrating that politicians have diverse aims and behaviours, but in doing so exhibit many key cultural phenomena known from cultural studies. Many of the Tweets politicians post contain images. The aim of this project is to understand what kinds of images are posted, in which situations and why they might want to do this. The student will be provided with access to a large collection of tweets collected by elected politicians in Germany, which is being collected as part of an i:imsk collaboration.

Titel: Games with sensors to encourage children in their movement and increase coordination skills.

According to the WHO, 41 million children under the age of 5 were overweight or obese in 2014 (WHO2014). However, obesity is preventable with a combination of healthy diet and adequate physical exercise. The aim of this project is to devise and develop interactive games for children to play, which will encourage them to be more active.

This project will require and interest in / and knowledge of programming and embedded systems (via raspberry pi).

The colourfulness of food plays a key role in food choice by influencing taste thresholds, sweetness perception, food preference, pleasantness, and acceptability [1]. A large body of research has shown that changing the hue or intensity of the colour of food items can exert a sometimes dramatic impact on the expectations and subsequent experiences of consumers [2]. There is also evidence suggesting meals with broad range of colours tend to more healthy.

While it makes sense that the image associated with a recipe will be important in determining how it is perceived and rated, in the recommender systems community no research to date has investigated this in detail. Using large datasets collected via popular Internet food portals (allrecipes.com and kochbar.de), this project will study the relationship between the colourfulness of food images and perception of the food and will investigate the feasibility of using colour information to provide recommendations. Potential research questions include:

A lot of research has been performed in fields such as nutritional science and psychology to understand and model how people choose the food they eat. From this research we know choosing food is a complex, multi-faceted process, influenced by biological, personal and socio-economical factors [1]. Yet for the majority of people, aspects of taste and sensory appeal seem to be the drivers for decisions, followed by health concerns, nutritional value, and price [3], meaning that the decisions can be modelled using relatively simple heuristics [4].

In this project the aim is to use eye-tracking to confirm whether this holds in the context of choosing dishes on online food portals. We wish to understand, which information people use to base their decision of which recipe to try and determine whether particular features (e.g. title, image, nutritional information boxes) influence the decision of which food is chosen. Such an understanding could lead to the possibility of changing the information shown in order to influence the recipe chosen to promote health.

Methodological inspiration for the study can be found in [2].

[3] Rozin P, Zellner D. The role of pavlovian conditioning in the acquisition of foodlikes and dislikesa. Annals of the New York Academy of Sciences.1985;443(1):189–202 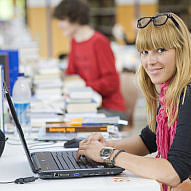