The scientific focus of our Department of Behavioural and Molecular Neurobiology lies on the brain mechanisms underlying social and emotional behaviours, and stress-related adaptations. We are particularly interested in the involvement of neuropeptides of the brain such as oxytocin, vasopressin, and corticotropin-releasing factor (CRF) in the fine-tuned regulation of anxiety- and depression-related behaviours, social fear, social preference versus social avoidance, inter-male and inter-female aggression, and maternal behaviour in rodents. Another major research topic is related to chronic psychosocial stress, and its consequences on, e.g., emotionality, neuroendocrine stress systems and immune functions. 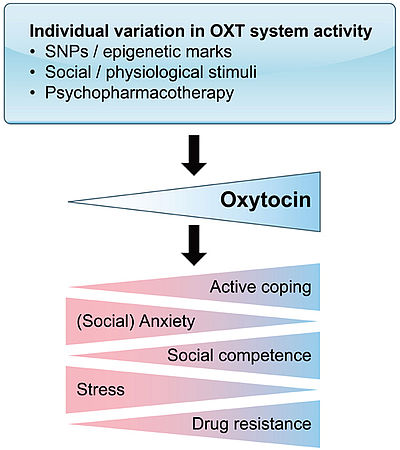 1. Involvement of oxytocin in social preference versus social fear

As brain neuropeptide, oxytocin modulates socio-emotional behaviours and exerts pro-social, anxiolytic, and anti-stress effects. We have extensively monitored local release patterns of oxytocin in response to various social and stressful stimuli using intracerebral microdialysis in conjunction with a sensitive radioimmunoassay. This builds the basis to reveal the functional importance of oxytocin in the context of social and emotional behaviours. Thus, we are currently investigating its role in social preference versus social avoidance and social fear using a mouse model of social fear-conditioning (SFC) (Menon et al., 2018; see projects Dr. Rohit Menon, Dr. Anna Bludau). This also involves aspects of social motivation and interactions with the reward system (Dr. Virginie Möller; Dr. Fernando Castillo-Diaz).

Scheme of the social fear conditioning paradigm. Mice receive a mild punishment when investigating a conspecific during acquisition resulting in robust social avoidance.

There is a strong translational aspect of this line of research, as social fear, social avoidance, and lack of social interactions are symptoms of human social dysfunctions seen in patients suffering from autism or social anxiety disorders. In this context, we combine behavioural analyses with neuropharmacological, immunohistochemical, RNA sequencing, neuronal tracing, and in vivo chemogenetic or optogenetic methods (see Menon et al., 2018). We also apply biochemical approaches to reveal the effects of oxytocin on micro RNAs and the role of microRNAs and other non-coding RNAs in behavioural regulation in distinct brain regions, such as the lateral septum (see Royer et al., 2022; see projects Dr. Anna Bludau). 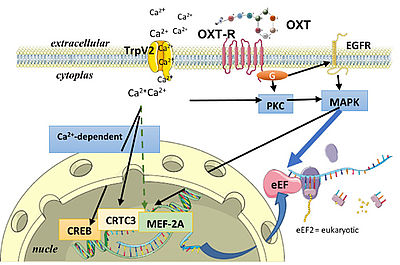 Oxytocin also affects neuronal plasticity and is capable to regulate morphological alterations and mitochondrial functions (see Meyer et al., 2020). Mutations in the oxytocin receptor gene have been associated with various psychopathologies and social dysfunctions, but how these affect the receptor function is unknown. Therefore, we are also interested in the functional and structural consequences of a genetic variant (SNP) of the oxytocin receptor gene at cellular level, which we studied in vitro and in silico in collaboration with Prof. Dr. Christian Wetzel (Regensburg) and Prof. Dr. Paolo Carloni and his group from the Research Centre in Jülich (see Meyer et al., 2022).

Oxytocin can be intranasally applied in humans, both acutely and chronically, and we are interested in the chronic effects of oxytocin on behaviour, which were described to substantially differ from acute effects. We could show that chronic oxytocin increases anxiety in rats (see Peters et al., 2014) and activates an alternative splicing pathway resulting in a soluble form of the CRF receptor 2 in vivo and in vitro (see Winter et al., 2021). 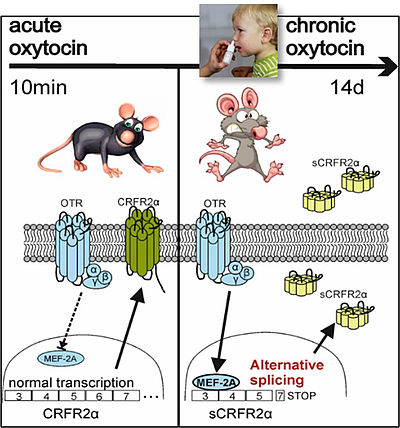 3. Neuropeptides in other social behaviours: From maternal love to sex aggression

Neuropeptides play a major role in various other social behaviours such as maternal behaviour, inter-male aggression, or sexual behaviour. For example, we could show that, in addition to oxytocin, the related vasopressin is an important promoter of maternal care and maternal aggression studying rats selectively bred for high (HAB) versus low (LAB) innate anxiety. Furthermore, an active CRF system impairs maternal behaviour and promotes maternal neglect. This project has particular clinical relevance as mal-adaptations of the brain oxytocin or vasopressin as well as of CRF system might be related to postpartum depression often accompanied by child neglect or even infanticide (projects Prof. Dr. Oliver Bosch).

Initiated by an EU-funded collaboration (7th FP EU program FemNat-CD "Neurobiology and Treatment of Adolescent Female Conduct Disorder: The Central Role of Emotion Processing") focused on conduct disorder in young girls, we are interested in inter-female aggression. This has been enabled by the establishment of a female aggression model, the Female Intruder Test (FIT) in combination with isolation and aggression training (DeJong et al., 2014; Oliveira et al., 2021). In this context, we focus on the interactions of oxytocin and vasopressin within distinct subregions of the lateral septum in modulating female aggression. So far, in collaboration with Prof. Dr. Veronica Egger and her group (Regensburg), we identified a pro-aggressive effect of oxytocin and an anti-aggressive effect of vasopressin in the ventral and dorsal parts of the lateral septum, respectively, using a combination of microdialysis, immunohistochemistry, receptor autoradiography, in situ hybridization, as well as neuropharmacological, optogenetic, chemogenetic and electrophysiological methods. 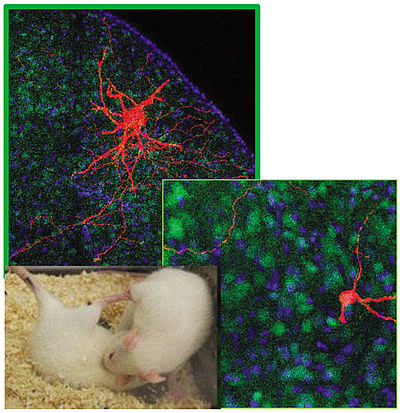 These studies are also part of the Themenverbund Violence and aggression in nature and culture of the University of Regensburg, with participating scientists from 7 different faculties.

4. The role of the mitochondrial translocator protein TSPO (18kDa) in behaviour regulation

TSPO is a ubiquitous mitochondrial protein, which has recently gained attention as a potential treatment target in psychiatric research due to anxiolytic and antidepressive effects of TSPO ligands (Rupprecht et al., 2022). We are interested in delineating the potential of TSPO ligands as a novel therapeutic approach using an animal model for extremes in anxiety- and depression-related behaviours, i.e., rats selectively bred for high versus low innate anxiety (HAB, LAB rats). 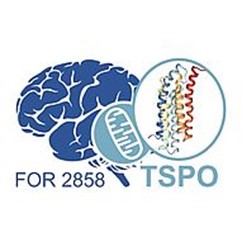 This project is part of the DFG-funded research group FOR2858 “Role of translocator protein 18 kDa (TSPO) as a diagnostic and therapeutic target in the nervous system”.

Chronic psychosocial stress is an established risk factor for the development of depression, anxiety, and psychosomatic diseases in vulnerable individuals. To reveal neuronal, molecular and neuroimmunological mechanisms underlying the severe consequences of psychosocial stress, we use a suitable mouse model, i.e., chronic subordinate colony housing (CSC) – also called ”4 mice and a macho”, which induces severe symptoms of chronic stress, such as colitis, increased anxiety-, but not depression-related behaviour, maladaptations of the HPA axis, and neuroimmunological alterations. In collaboration with Prof. Dr. Stefan Reber (University of Ulm), we are currently investigating the interplay between chronic stress and acute social trauma on behavioural, neuroendocrine, and immunological levels (see project Dr. Katharina Gryksa-Zotz). 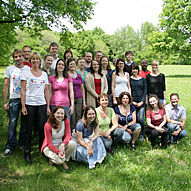