The CITAS Dialog Series offers an opportunity to discuss and debate social, cultural and political issues that are highly relevant today. The series gives a platform to scholars, experts from think tanks, politics and media, with the discussions taking place not only at the University but also in public institutions. The CITAS Dialog series seeks to make an important contribution to knowledge transfer and exchange.

The US Presidential Election in Ukrainian Eyes: Nepotism, Corruption and Celebrity Presidents 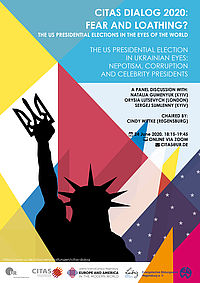 Three established experts from journalism, non-governmental organizations (NGOs) and think tanks working in, from and on Ukraine will offer their perspectives on US-Ukrainian relations and their global significance. They will discuss the significance of Ukraine, and the broader East European region, for the upcoming US presidential elections. Strategically positioned between Russia and the EU, affected by armed conflict since 2014, Ukraine has been a focal point of international politics for years. Yet, the USA has refused strong involvement, not to mention leadership, in reaching a conflict settlement. Is this an indication that US foreign policy is turning its back on Ukraine, the region and maybe even Europe?

Beyond war and geopolitics, this seemingly peripheral country could become central to the election as both presidential candidates have been connected to corruption scandals relating to Ukraine. What visible and invisible ties connect the USA and Ukraine in terms business and other interests?

Moreover, the TV- and New Media-celebrity status of the current US and Ukrainian Presidents might be considered symptomatic of broader global trends relating to Populism and a rejection of so-called ‘traditional politics’ and ‘elites’. Ukraine’s domestic and foreign policy has been shaped by struggles with corrupted and kleptocratic elites, with external influence on elections and political decisions for more than two decades and has led to civic unrest several times. Could we speak of a ‘Ukrainization’ of politics in the USA?

The experts will discuss these contemporary ‘Eastern’ perspectives on the ‘West’ on the panel and will then engage in an open dialogue with the public audience.

Speakers:
Natalia Gumenyuk (Kyiv) is a Ukrainian journalist and author. She is the founder of the Public Interest Journalism Lab, which promotes constructive discussion around complex social topics. She was a co-founder, and from 2015 to 2020 she headed the independent Ukrainian broadcaster Hromadske TV and the English-language Hromadske International project. Gumenyuk specializes in reporting foreign affairs and conflicts. Her recent book, The Lost Island. Tales from Occupied Crimea (2020), features her six-year reporting from Russian-annexed Crimea.

Orysia Lutsevych (London) is a research fellow and manager of the Ukraine Forum in the Russia and Eurasia Programme at Chatham House, the renowned Royal Institute of International Affairs. A graduate in international relations, she focuses on social change and the role of civil society in democratic transition in the post-Soviet region. She is an expert on Ukraine, having been executive director of the Open Ukraine Foundation, and on the broader region with expertise on Georgia, Russia and relations with the EU.

Sergej Sumlenny (Kyiv) has been head of the Heinrich Böll Foundation in Kyiv since 2015. Before that he worked as a business journalist and consultant, having been awarded a doctorate in political science with a focus on the significance of journalism. He has commented extensively in German and international forums on Ukraine and international politics.

Chair:
Cindy Wittke, Leibniz Institute for East and Southeast European Studies (IOS) and member of the Steering Committee of the Leibniz ScienceCampus “Europe and America in the Modern World” in Regensburg 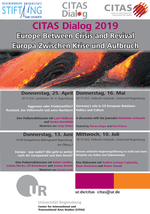 The 2019 CITAS Dialog series was supported by the Vielberth Foundation and addressed the issue of "Europe between Crisis and Revival". Those events are described below.

How can EU migration policy bring about suitable solutions despite evident divisions across the bloc? This was the focus of the discussion on 12 December 2019 with Dr. Raphael Bossong, political scientist and researcher at Stiftung Wissenschaft und Politik in Berlin. The discussion was moderated by Prof. Dr. Robert Uerpmann-Wittzack (Law, University of Regensburg).

The event was part of the CITAS Dialog series, which is supported by the Hans Vielberth Foundation. At the outset, Bossong made it clear that migration itself is not a problem. The key issue is, in his view, how the EU deals with migration in the context of its role as an actor in the realm of security policy and as a crisis manager.

There are differences in the migration and asylum policy of EU member states, in some cases quite vast divergences. This means that EU-wide solutions can be difficult to achieve as individual states seek to secure their national interests. For Bossong, this means the EU faces a choice in terms of shaping its future: should it be liberal and open, or closed off and isolated.

Despite the divergences across member states, border security is a common EU issue that is tackled through concerted action through the Frontex European Border and Coast Guard Agency. However, the cooperation within Frontex also reveals the faultiness running through the EU because it can only become effective if called upon by individual states. Frontex thus remains bound up in what Bossong termed “state security policy measures”. Frontex is thus symptomatic of the need for European migration policy to address the issue of whether national or supranational elements will shape the future of the EU.

The event was supported by the Hans Vielberth Foundation and in cooperation with Junges Europa.

Why poor governance can prove so stable: Examples from Italy and Southeastern Europe

On 10 July, CITAS in cooperation with the Graduate School for East and Southeast 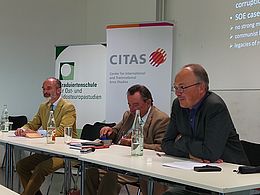 European Studies, hosted the fourth CITAS Dialog of the 2019 summer semester. The Milan-based political scientist Andrea Lorenzo Capussela came to Regensburg to engage in a discussion with the Klaus Buchenau on why poor governance can provide stability, drawing on examples from Italy and Southeastern Europe. Both discussants drew on their disciplinary and regional specialisms to explore the intersections of political, economic and cultural factors, with the law scholar Rainer Arnold chairing the discussion ably.

Ultimately, clientelism and corruption account for the way in which relatively inefficient economies engender stability in both Italy and Southeast Europe. The inefficiency tends to benefit a small group in society, limiting the benefits of economic growth, ensuring that many ordinary citizens adapt to get by in these systems, rather 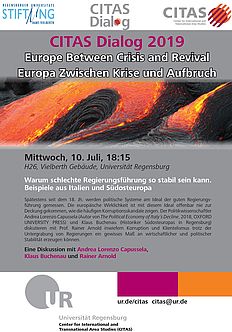 than offering a challenge. However, the causes of this situation, the discussants argued, differ in each case with former Yugoslavia experiencing a much greater variety than Italy of political orders and regimes throughout which clientelism and corruption have proved common. The discussants were keen, though, to avoid suggesting that cultural determinism or path dependency can explain the equilibrium of inefficiency and corruption that seems to pertain.
An engaged audience offered examples from other parts of Eastern and Central Eastern Europe to suggest that corruption and clientelism must not necessarily prove immutable. The dialogue between the discussants, chair and audience certainly laid the grounds for more transnational comparison of the longue-durée and present-day manifestations of corruption, clientelism, social upheaval and structural stability.
CITAS looks forward to more Dialog events in winter semester 2019 with the kind support of the Vielberth Foundation.

Following European Elections in just 27 EU countries in 2019 with the UK's drawn out exit from the EU a pan-European rise in populist and anti-EU tendencies was expected. Yet this discussion showed a variety of tendencies across Europe in the recent elections, while Brexit might paradoxically strengthen European unity.

The public discussed with Rainer Liedtke (Regensburg), Jochen Mecke (Regensburg), Ulf Brunnbauer (IOS) and Joanna Rostek (Gießen) what the future might hold and what impact the past has had on European relations. The discussion was chaired by Carsten Lenk (EBW, Regensburg).

This event was organized in cooperation with the Evangelischen Bildungswerk Regensburg. And it is supported by the Hans-Vielberth-Stiftung.

A report on the discussion can be found here. 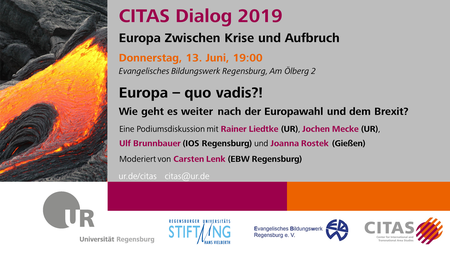 CITAS is delighted having been hosted a discussion with Madeleine Schwartz, winner of the European Press Prize 2019 for her Guardian article "The End of Atlanticism: Has Trump killed the ideology that won the Cold War?".

While the Cold War led to the division of Germany, it also laid foundations that cemented West German-US cooperation in the realms of the economy, politics and culture. Despite cultural and political tensions, whether expressed in fears of Americanization or opposition to the Iraq war, it seems that (West) Germany and the United States developed a set of common values that found expression in multilateral, cooperative Atlanticism.

With Madeleine Schwartz, a journalist who has written for The Guardian, The Atlantic and The New York Review of Books, among others, we discussed the state of transatlantic cooperation and Germany’s role in European-American relations. Has populism in both Europe and the US threatened the established political order? Is the multipolar world also fracturing along the Atlantic? Or perhaps there is hope for renewed cooperation in realms beyond politics, so in the world of culture? These were some of the questions she addressed and which the University Press Office has written up more fully (in German). 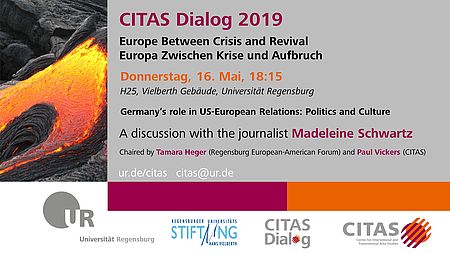 Together with colleagues from IOS - the Leibniz Institute for East and Southeast European Studies and the Graduate School for East and Southeast European Studies, the first event in the CITAS Dialog 2019 series had taken place. This public discussion featured Lauri Mälksoo (Tartu) and Gesine Dornblüth (Berlin) in discussion with Cindy Wittke (IOS, Regensburg), discussing the s international and regional significance of Russia's approaches to international law.

The CITAS Dialog series seeks to examine the state of Europe today, located between between crisis and revival as Brexit, tensions with Russia and the rise of populism in Europe and across the Atlantic impact European integration and Europe's international position.