Since its inception in 2013, the ISLE Spring/Summer Schools have brought together (doctoral) students and early-career researchers from around the world to learn about the latest developments in the field of linguistics and provide a forum for strengthening their international networks.

The 2017 Summer School of the International Society for the Linguistics of English (ISLE) took place in Regensburg from 4-7 October. The theme of this year's Summer School was "Variation in World Englishes: advanced issues in theory and methodology".

We are happy to announce that the following scholars have agreed to give plenary lecutures at the Summer School:

In addition to the plenary lectures there will be five workshops focussing on theoretical and methodological developments in World Englishes. 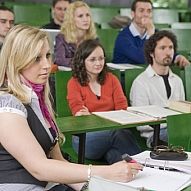