Internationally renowned linguists have joined or will join us for a while as "Regensburg Visiting Professor in World Englishes" to teach courses to our students, give lectures, and discuss our shared research interests:

This ties in with earlier visits of leading American sociolinguists who taught a "Graduate Seminar in English Linguistics": 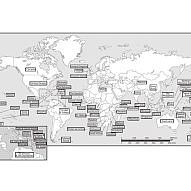