Welcome to the Atomic-Scale Science on Insulators Group!

Atoms and molecules are the fundamental building blocks of matter, which is why the physical and chemical properties of these nanoscale objects govern our everyday lifes. Our research focuses on the investigation of these structures at the atomic length scale. We use cutting-edge scanning probe microscopy in order to reveal the basic properties of these systems. This work aims to lay the foundation for a variety of technical applications, such as molecular electronics or the design of new chemical compounds. 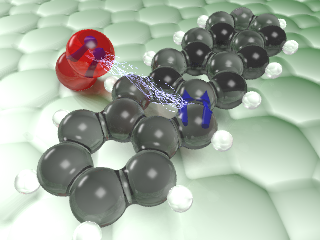 The excited triplet in organic molecules can be quite long lived because the transition to the singlet ground state is optically forbidden. Nearby oxygen is known to quench the triplet state. We now succeeded in tracking this transfer of energy between a pentacene and an oxygen molecule directly in space. In the junction of an atomic force microscope we applied a sequence of fast electrical pulses to the pentacene molecule, driving it into the magnetic triplet state in a controlled fashion. The energy transfer from this excited triplet state to oxygen molecules nearby was then tracked in time by measuring miniscule changes in the force acting on the tip. By means of single-molecule manipulation techniques, different arrangements with oxygen molecules were created and characterized with atomic precision, allowing for the direct correlation of molecular arrangements with the lifetime of the quenched triplet.

Visible light has a wavelength more than a thousand times larger than the size of an atom. Quite ironically, while the fundamental arrangement of the atomic world can nowadays be routinely imaged, at these atomistic length scales the behavior of light remains a mystery in many aspects. This applies in particular to the temporal behavior of light at these ultrasmall scales, where the well-known laws of classical physics lose their validity and quantum physics rules.

Together with Prof. Rupert Huber and his team as well as our theory collaborators at the MPSD in Hamburg we have developed a method to detect the dynamics of light on such a small scale with high temporal resolution. The key ingredient is a single-molecule switch acting as an atomic-scale voltage standard. 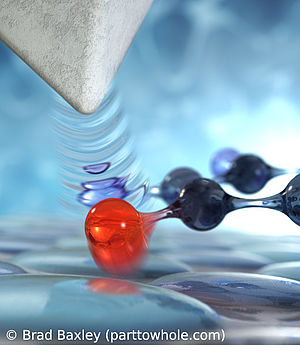 In 2016 in a close collaboration with Prof. Rupert Huber and his team we succeeded in combining sub-molecular STM imaging and subcycle lightwave electronics (see further below). In a low-temperature STM, an intense phase-locked half-cycle THz pulse was tightly focused onto the tunneling junction, where the electric field acts as a transient bias voltage across an STM junction.

Now, in this publication we demonstrate the combined femtosecond and angstrom access in the control of matter. The ultrafast localized electric fields in our lightwave STM enable exerting atomic-scale femtosecond forces to selected atoms. By means of these atomic forces on the intrinsic timescale of molecules, coherent atomic motion can now be excited. Utilizing coherent structural dynamics, we can modulate the quantum transitions of a single-molecule switch by up to 39%. 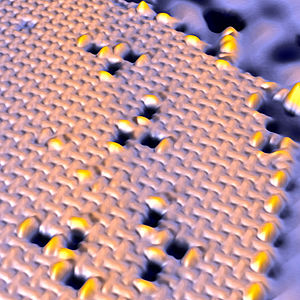 In any type of future molecular-based quantum cellular automata, the perfect placement and alignment of cells is of crucial importance, as the latter critically determines the interaction between neighboring cells. Self-assembly allow for such a precise atomic-scale alignment of zillions of molecules, however, implementing a function requires particular structures of aligned cells and not just extended monolayers thereof. We show that self-assembly can be combined with an activation of cells. In our work, selected molecules inside self-assembled islands are activated by vacancy creation from scanning-probe based manipulation, but we propose that activation can be also realized by other means as the removal of ligands, for example. This general concept shows how to combine the precise mutual atomic-scale alignment of molecules by self-assembly, on the one hand, and the implementation of specific functionality into otherwise homogeneous monolayers, on the other.

Electron transfer plays a crucial role in many chemical reactions, from photosynthesis to combustion and corrosion. However, the way in which redox reactions affect individual molecules and, in particular, their electronic structure, remains largely unclear. Unveiling these fundamental aspects requires the development of experimental tools allowing the observation of electron transfer down to the single molecule level. Here, we introduced a novel method capable of performing tunnelling experiments on non-conductive substrates to map the orbital structure of isolated molecules upon electron transfer. By driving a change in the redox state of a molecule synchronized with the oscillating tip of an AFM, previously inaccessible electronic transitions are resolved in space and energy. 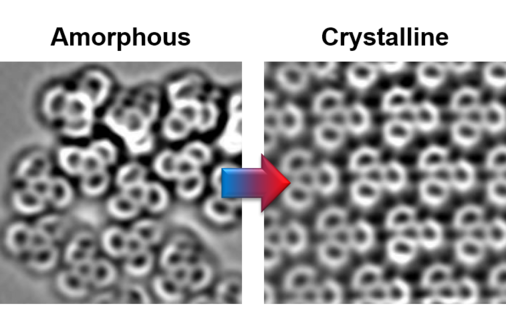 We investigated the structures of a two-dimensional hydrogen-bonded film, both in the kinetically trapped amorphous state and in the thermodynamically stable crystalline phase. The sub-molecular resolution provided by nc-AFM allows resolving the changes in the bonding motifs upon transition to the crystalline state. These results reveal how the crystallization governs the length scale of the network order for non-flexible molecular species without affecting the local bonding schemes. 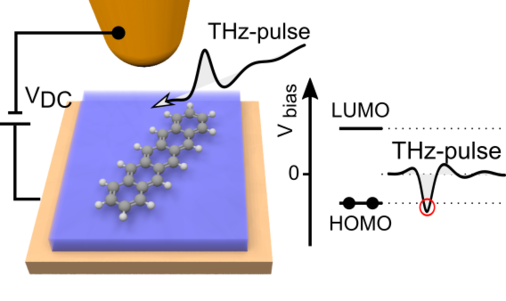 In a close collaboration with Prof. Rupert Huber and his team we succeeded in combining sub-molecular STM imaging and subcycle lightwave electronics. In a low-temperature STM, an intense phase-locked half-cycle THz pulse was tightly focused onto the tunneling junction. The THz field acted as a quasi-instantaneous transient bias for the tunnelling junction and the resulting time-averaged tunnelling current was measured. It was possible to record a femtosecond snapshot image of an individual molecular orbital, with a time resolution of 115 fs, determined with an autocorrelation method. By correlating two successive tunnelling events, the coherent THz vibrations of the single molecule were directly tracked in time with sub-angstrom precision. 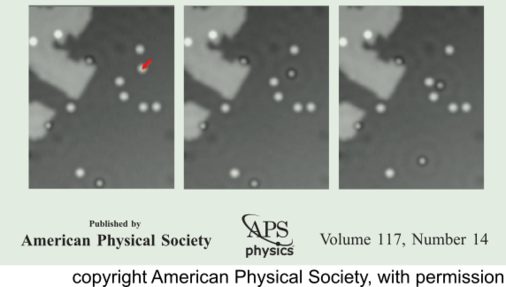 Metal atoms on insulating films can exhibit several different charge states, which can be controlled on the level of individual atoms. As an atom’s electron shell is decisive for almost all of its physical and chemical properties, a control of the charge state offers the prospect of controlling adsorbates in many other aspects.

We demonstrated that the diffusion behavior of individual gold adatoms on ultra-thin NaCl films depends strongly on its charge state and can therefore be controlled by means of STM-based manipulation. 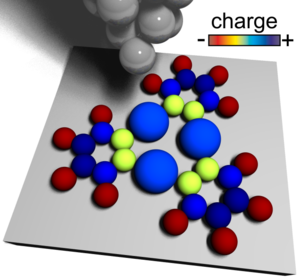 Kelvin Probe Force Spectroscopy (KPFS) is an established technique based on atomic force microscopy (AFM) to determine local fluctuations of a sample’s work function. Such fluctuations can be attributed to local charges or dipoles at the sample surface. Triggered by the leap in resolution in low-temperature AFM with functionalized tips [Gross et al. Science 325, 1110 (2009)], KPFS was recently applied to study individual molecules exhibiting a dipole moment with sub-molecular resolution.

In our work we apply KPFS to successfully map out the polar nature of bonds inside individual molecules. In addition, we clarify the origin of certain artifacts in KPFS that inevitably occur at very close tip-sample distances. We introduce a new method to determine the charge distributions with sub-molecular resolution, and we benchmark this method for various systems. Thereby we demonstrate that this new method allows for resolving intramolecular charge distributions with unprecedented resolution - a regime for which conventional KPFS is shown to fail.

We investigated a molecular switch that is based on a novel concept: controlling the energetic order of molecular orbitals. This is fundamentally different from previously proposed mechanisms for molecular switching such as isomerization, charge-, or spin-state manipulation. The switching takes place in negatively charged Copper(II)phthalocyanine molecules on NaCl/Cu(100). In these, a Jahn-Teller distortion lifts the degeneracy of the lowest unoccupied molecular orbitals. By placing Au and Ag-atoms close to the molecule, the energetic order of these two levels can be switched in a bistable fashion. Hence, such a molecular switch can be actuated by subtle changes in the local vicinity of a molecule, i.e. without directly injecting charge carrier into the switch itself. 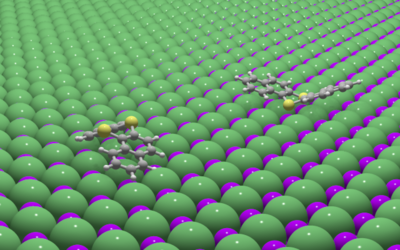 We have visualized a difference in the chemical structure of two molecular configurations of dibenzo[a,h]thianthrene (DBTH) molecules by means of atomic force microscopy.

Recently, Gross et al. (Science, 2009) have demonstrated the role of tip-functionalization in atomic force microscopy by resolving the chemical structure of pentacene molecules. Shortly after, this technique was used to identify the structure of an organic molecule. In this paper, we have investigated DBTH molecules adsorbed on NaCl layers in a combined scanning tunneling and atomic force microscopy (STM/AFM) study. DBTH molecules are derivates of the butterfly-shaped thianthrene molecule, in which the wings are extended by one benzene ring. By inelastic current excitations in STM mode, we can switch the wings between pointing up or down. The positions of the wings, however, could only be revealed in the AFM mode. The atomically resolved AFM images also reveal that the butterfly is flapping its wings as opposed to turning upside down.

In many areas of chemistry and physics the symmetry of an object or process plays a decisive role. One prominent example is the selection rules governing optical transitions. We investigated the influence of molecular symmetry on the surface potential landscape. For this purpose, the nonthermal diffusion induced by inelastic excitations of a molecule, for which four symmetry distinct isomers exist, was studied. The observed nonthermal diffusion was found to be qualitatively different for all four symmetry distinct isomers. This demonstrates that adsorbate symmetry plays an important role in determining the surface potential landscape. 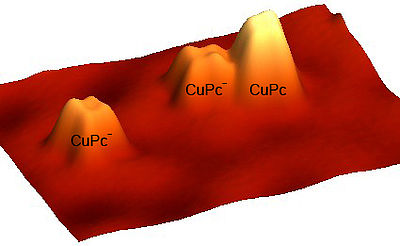 Controlling the charge state of single molecules: visualizing changes in the tunneling barrier with submolecular resolution

The tip of a scanning tunneling microscope was used to controllably add and remove an additional electron to and from a single molecule. It is shown that charge-state control of individual molecules adsorbed on surfaces can be obtained by choosing a substrate system with an appropriate workfunction. By subtracting images of molecules in the neutral and anionic charge state, information regarding the spatial distribution of the additional charge was obtained. These difference images show marked intramolecular contrast. 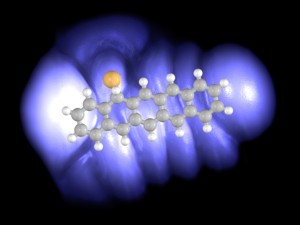 Imaging Bond Formation Between Gold and Pentacene on an Insulating Surface

A covalent bond between an individual pentacene molecule and a gold atom is formed by means of single-molecule chemistry inside a scanning tunneling microscope junction. The bond formation is reversible, and different structural isomers can be produced. The single-molecule synthesis is done on ultrathin insulating films that electronically isolate the reactants and products from their environment. Direct imaging of the orbital hybridization upon bond formation provides insight into the energetic shifts and occupation of the molecular resonances. 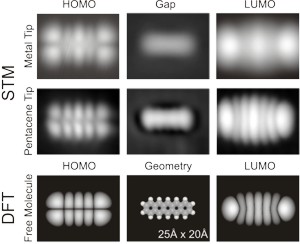 Ultrathin insulating NaCl films have been employed to decouple individual pentacene molecules electronically from the metallic substrate. This allows the inherent electronic structure of the free molecule to be preserved and studied by means of low-temperature scanning-tunneling microscopy. Thereby direct images of the unperturbed molecular orbitals of the individual pentacene molecules are obtained. Elastic scattering quantum chemistry calculations substantiate the experimental findings. 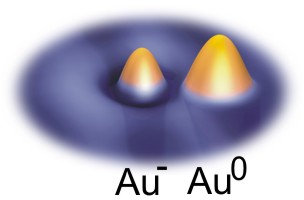 The nature and control of individual metal atoms on insulators are of great importance in emerging atomic-scale technologies. Individual gold atoms on an ultrathin insulating sodium chloride film supported by a copper surface exhibit two different charge states, that are stabilized by the large ionic polarizability of the film. The charge state and associated physical and chemical properties such as diffusion can be controlled by adding or removing a single electron to or from the adatom with a scanning tunneling microscope tip. 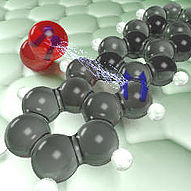 In a recent publication in Science, we report on a novel pump-probe atomic force microscopy, with which we measured the triplet lifetime of individuals molecules.