Universität Regensburg emphasizes the personal development and enrichment of students as an integral part of their academic experience. A vibrant cultural life has developed on campus, including

The attractiveness of the university is enhanced by the international appeal of the city of Regensburg and its ever present traces of more than 2,000 years of history.

In 2006, the entire historical city center became part of the UNESCO World Heritage program. No other city in Central Europe testifies as well to the political, economic, cultural and religious developments of the High Middle Ages as the city of Regensburg with its authentically preserved historical architecture. At the same time, Regensburg is a bustling town, young at heart. This is not least due to the close ties of the university with the social and economic life of the city, the establishment of renowned industrial and technological firms as well as the students of three institutions of higher education in Regensburg. 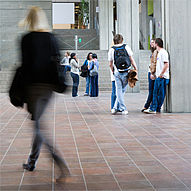