This RTG will give excellent students the opportunity of a highly qualifying scientific education at an internationally competitive level. The research topic “ion pairs in molecular reactivity” will provide in a natural way interdisciplinary cooperations, transfers of concepts and a broad and high impact in academia and industry. In addition, the topic ion pairs will allow to combine model systems, methods and perspectives from various chemical disciplines in a unique and focussed way based on their common physical properties. Thus, this RTG provides an ideal basis for a broad and stimulating education programme including international speakers and research stays for PhD students.

Ion pairs are omnipresent in chemical reactions and provide both a huge potential for synthesis and catalysis and so far unsolved challenges for experiment and theory to elucidate their structures and reaction mechanisms correctly. This is due to the basic physical properties common to all ion pairs, the electrostatic interactions between counter ions, which combine the highest interaction energies of all intermolecular forces with the lowest distance dependence (r-1). As a result, there is a contrast of numerous famous and highly effective ion pair reagents and catalysts in synthesis and only very limited examples for an experimental access to structures or a rationalization of ion pair effects.

P1: Prediction of Enantioselectivities Based on Ion Pair Intermediate Structures

Prediction of Enantioselectivities Based on Ion Pair Intermediate Structures

The prediction of structures or even enantioselectivities in In the field of Brønsted acid catalysis is still a major challenge, since only  a few experimental studies exist in contrast to a multitude of theoretical calculations. Therefore, in this project experimental descriptors for the stereoinduction in ion pairing catalysis shall be developed on the example of chiral phosphoric acids. 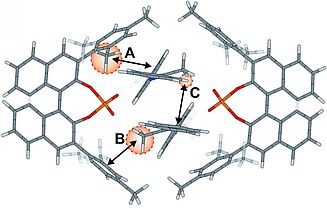 P3: Identifying the Governing Effects on Reaction Path Bifurcations (BIFs) in the Frag-mentation of Terpenoid Diazoniumions by Experimental Means

The reactivity of secondary carbocations in bicyclic frameworks have been shown to not only be governed by their delocalized electronic structure (non-classical) but also by the special topology of their potential energy surface (PES). The latter can feature valley ridge inflection points that enable off-MEP processes (MEP = minimum energy pathway) and hence pose fundamental questions of how to predict selectivity. We found, for the first time, experimental evidence of such bifurcations (BIFs) in the dissociation and structural rearrangements of photochemically generated diazoniumions (Figure P3). To gain deeper understanding of the governing principles of how product selectivities are achieved one needs to go the extra mile of including counterion and specific solvent interactions. One seminal paper did show that reactions taking place on bifurcating PES are hypersensitive to changes of ‘external’ conditions , however these important factors are usually ignored in published data. 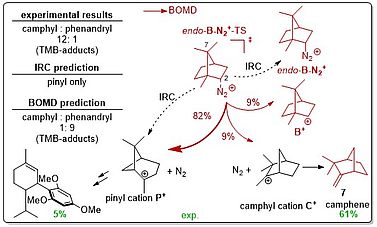 In closed shell-pericyclic processes, the concerted reaction pathway can be satisfyingly rationalized by FMO concepts (Woodward-Hoffmann-rules). If, however, the closed shell species is turned into an open-shell ion (here: radical cation), what happens in terms of its electronic nature and the FMO-based reactivity concepts? The challenges associated to the prediction and description of mechanisms are two-fold: The occurrence of non-MEP behavior questions the established models of predictive power and as such constitute a research field on its own. And secondly, the mechanistic complexity increases exponentially by the so far scarcely studied effects on MEP and non-MEP situations arising from the mutual interaction of the radical cations and its assocaited counterion. 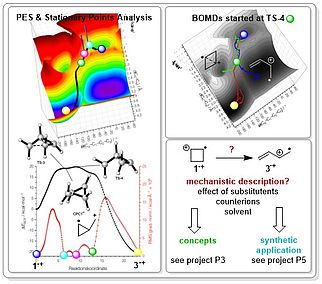 P5: Control of Reactivity and Selectivity through Ion Pairs in Pericyclic Reactions

Control of Reactivity and Selectivity through Ion Pairs in Pericyclic Reactions

The central question of this project is whether one can alter the reaction path­way pericyclic reactions through ion pair interactions in dipols or radical cations, this way changing both sterics as well as electronics of the intermediates.1 For this purpose, we will investigate monocyclopropanated pyrroles and furans, for which we could demonstrate a 6π-electrocyclic ring-opening / [3+2]-cycloaddition cascade under thermal conditions. 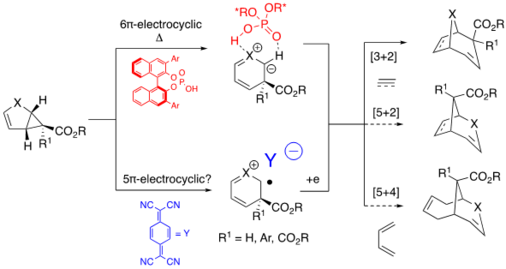 Ion pairs can be generated in liquid ammonia by direct reduction of neutral species with solutions of the alkali metals. The relative endpoint of the reactions will be determined by the low-temperature single crystal X-ray analysis of the ammoniates which crystallize. In solution, the reactions will be monitored via 13C-NMR in collaboration with R. Gschwind and via vibrational spectroscopy with P. Nürnberger. In collaboration with the Bauer group the chemistry of silylium carbonylates will be explored. 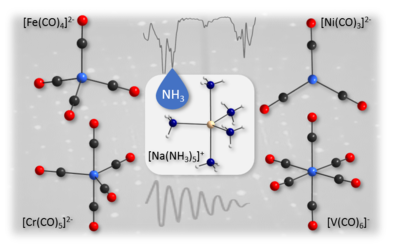 The Lewis base-catalyzed condensation of electrophiles is highly useful syntheti- cally, but encounters formidable obstacles for electrophiles of low reactivity. The ion pair catalysts developed in this project on the basis of pyridinamide anions are expected to pro- vide significantly higher reaction rates and thus an equally expanded scope of these reac- tions.

We will investigate how counterion effects influence photochemical processes and want to identify mechanisms for steering the reaction outcome in this way, in collaboration with groups from synthetic chemistry. Topics to address comprise spectroscopic signatures of ion pairing in liquid ammonia, how photoswitching can be utilized in ion-pair catalysis, and the temporal evolution of short-lived ion pairs formed in a photoinduced charge-transfer process. 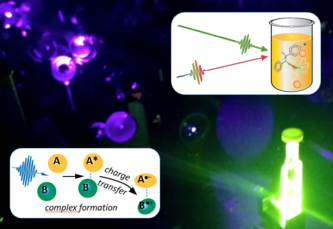 P9: Modulating the reactivity in photoredox catalysis by ion-pairs

Modulating the reactivity in photoredox catalysis by ion-pairs

Photoinduced electron transfer between a substrate molecule and a neutral photoredox catalyst yields as initial reactive intermediates a primary radical ion pair. The stability and reactivity of these reactive intermediates is important for subsequent reaction steps enabling their use in synthesis. We explore in this project the effect of added salts or organic ions, including counter ions in the case of charged photocatalysts, and charged micellar interfaces on the stability and reactivity of the photogenerated radical ions. 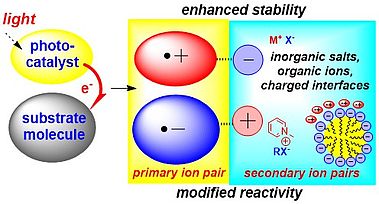 The project harnesses ion-pairing of chiral organic cations with (achiral) anionic catalysts for asymmetric hydrofunctionalisation reactions. A variety of suitable anionic catalysts are studied. PhD students will receive training in the synthesis of organic and organometallic molecules, catalytic studies, and mechanistic investigations. 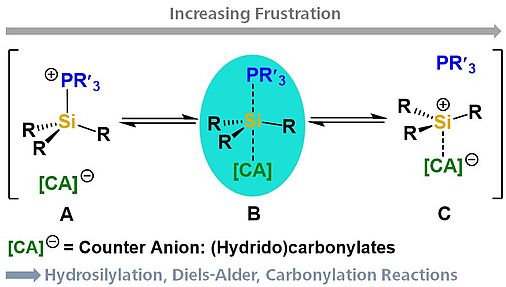 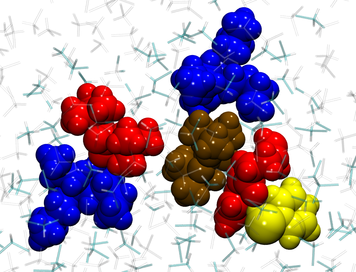 The main challenge of structure elucidation of ion pairs in solution is the coexistence of multiple structures and aggregates most often exchanging in a complex matrix. This general property of ion pairs hits exactly the two weak points of NMR spectroscopy, the low sensitivity and the slow time resolution. Therefore, in this pro­ject the potential of ad­vanced NMR methods shall be explored to improve the time reso­lu­­tion and the sensitivi­ty of NMR spectrosco­py in ion pair applica­tions. Within this project, the postdoc will apply and further develop multiple methods from various fields of NMR spectroscopy in close contact with experimentalists and theoreticians. 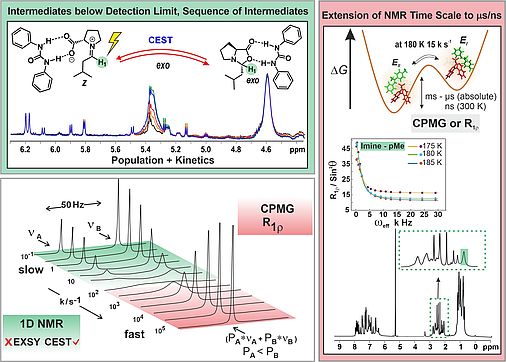 Ion pairs set significant challenges for theoreticians and experimentalists alike. A variety of state-of-the art spectroscopic methods from IR and UV/Vis ultrafast spectroscopy to advanced NMR provide highly needed experimental insight into their structure and reactivity. The understanding and interpretation and thus the impact of spectroscopic data is maximized when theoretical prediction of spectra are available. However, the computational approach to these spectra is a multistage process and needs the utilization of a variety of compuational chemsitry methodologies. The underlying resion is hidden in the highly flexible and often unknown conformations that may be populated under the experimental conditions. Sampling such conformations in MD Simulations can reveal conformational states­ if the force field quality is sufficient, but cannot give access to spectroscopic data. Heuristic approaches based on structure-property relations are not accurate enough, and high-level ab initio QC methods are needed. A combination of MD sampling, force field adaption, and QC spectra prediction will give insight into systems, for which theory was so far unsuccessful. 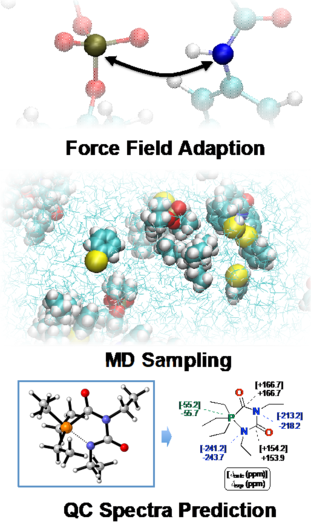 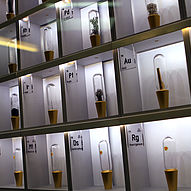