Research at the group of Prof. Horinek

We work on molecular dynamics simulations of various liquid, interfacial and polymeric systems.

In recent years, it is becoming more and more evident that liquid mixtures of simple chemical species do not always form simple molecular solutions, but often show aggregation from molecular-scale aggregation with some similarities to solutions of traditional surfactants that form micelles up to sizes of several hundred nanometers where the distinction from a macroscopic two-phase system is not well understood. This aggregation is rather general, it is for example observed in ternary mixtures of water, a water-insoluble compound, and a third component that mediates solubilization. Many of these systems are technologically important and are of strong interest, rendering these systems - among many other applications - suitable for speeding up enzymatic reactions and other reactions where solubility is a limiting factor. In this light it is surprising that aggregation in such solutions is not well understood. Inspired by the surprising experimental observations, atomistic molecular dynamics simulations of water/ethanol/octanol mixtures performed in our group have indeed shown the presence of micelle-like aggregates for compositions that appear macroscopically as a single phase. Later, we were able to demonstrate also the presence of bicontinuous phases and reverse aggregates. Currently, the focus turns to the understanding of the underlying physical principles, and in a collaborative work with German, French, and Australian groups a model based on a balance of hydration force and entropy was developed for this weak aggregation on an energy scale below the thermal energy. 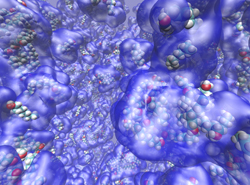 Stability of Proteins in osmolyte and denaturant solutions

The correct structure of protein in water is essential for all life on earth. The thermodynamics of protein conformations depends critically on the solution composition. Some molecules like urea act denaturing, while molecules like trimethlyamine N-oxide stabilize the folded structure. We study the stability of peptides in solutions of urea, TMAO, salts etc. by molecular simulations. Thermodynamic properties are derived from a thorough statistical mechanical analysis of the results.

A polyglycine chain interacting with urea.

Detailed MD simulations allow us to evaluate models based on solvent accessible areas, which are frequently used in biochemistry. In our 2014 JPCB work, we were thus able to modify and improve the well-known transfer model for the prediction and interpretation of protein m-values.

Moeser, B.; Horinek, D.
Unified Description of Urea Denaturation: Backbone and Side Chains Contribute Equally in the Transfer Model
J. Phys. Chem. B 2014, 118, 107.

High pressure has significant effects on the stability of proteins. In organisms like fish that live in the deep sea, the denaturing effect of high pressure is often counterbalanced by stabilizing osmolytes. We aim at the simulation of such effects with simple force fields.

Ions play an important role in Chemistry, Biology, and Physics, and their effects are often explained by their electrostatic interactions. But different ions of the same charge have different effects, and the interactions of an ion in solution and its environement are more complicated. The structure of the solvent is affected by the presence of the ions, which leads to many surpriding effects in bulk and at interfaces.

We study ions in water and at different interfaces and in colloidal systems by MD simulations. We determine thermodynamic properties like solvation free energies, surface tensions, activity coefficients from the simulations and try to deduce the mechanisms and origin of these ionic effects.

Triflate ions at a micellelar
and at an air/water interface. 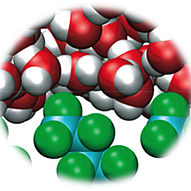