News of the Department 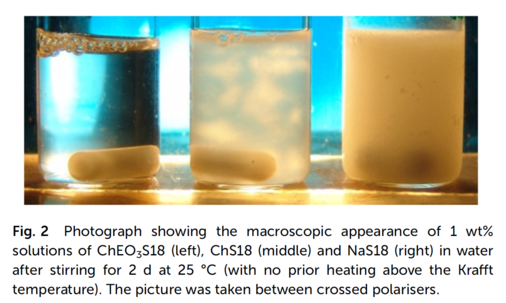 Surfactants find widespread use in daily life for cleaning purposes and form a vital part of many industrial formulations. So far, their application has been limited to amphiphilic structures with relatively short alkyl chains (typically up to C14 or C16) due to the poor solubility of longer-chain homologues under relevant conditions. Here we introduce a concept that eventually allows octadecyl sulfates and carboxylates to be effectively solubilised in water at room temperature. Through synthesis of alkoxylated derivatives of choline – an abundant molecule of natural origin – we have designed a new class of counterions preventing the precipitation of long-chain surfactants, as commonly observed with alkali ions or unmodified choline. The resulting amphiphilic systems show superior properties with respect to surface activity, which directly translates into enhanced cleaning performance in lab-based washing tests. Studies on the cytotoxicity and biodegradability of the alkoxylated choline derivatives highlight their potential for sustainable surfactant development. In the end, our approach could pave the way towards the use of hitherto unleveraged raw material resources in tailoured surfactant formulations for cleaning applications and beyond.

In the context of efficient drug delivery systems, catanionic vesicles offer several advantages, such as spontaneous formation and long-term stability. However, especially the cationic component of such vesicles is often toxic. Thus, the search for less toxic, biocompatible amphiphiles, while maintaining the desirable aggregation properties is crucial. In this work, we present cytotoxicity towards the human cell line Hela as well as biodegradability data of some cationic surfactants based on the natural osmolytes choline and ectoine. The synthesis, aggregation and solubility behaviour as well as the stability in water of these compounds is discussed. In order to induce the spontaneous formation of vesicles, several of these cationic surfactants are combined with choline carboxylates with varying chain length in different mixing ratios and characterised with cryo-TEM. Further, the cytotoxic effect of such novel catanionics is evaluated as a function of the cationic-anionic ratio and compared to that of classical combinations of sodium dodecylsulfate and dodecyltrimethylammonium bromide.

This article discusses new concepts in macroscopically monophasic colloidal systems, where entropy is a major driving force for very subtle interactions and structuring. First, we show how microemulsion-similar structures can be achieved with hydrotropes. These aggregates are less defined in structure and of shorter lifetime than classical micelles but still potentially useful microheterogeneities with internal interfaces. The other extreme case of strong interactions is given when cationic and anionic surfactants are mixed in equimolar ratios. It is well known that surfactants can be made more soluble when ethylene oxide groups are incorporated. This strategy is applied for such ‘catanionics’ to avoid surfactant precipitation. Finally, we consider the fact that ethylene oxide groups increase the size of the hydrophilic headgroups of carboxylates so that the geometrical constraints compel a direct spherical shape even in the absence of water. As a result, ‘water-free direct microemulsions’ with only charged surfactants and oil are conceivable. 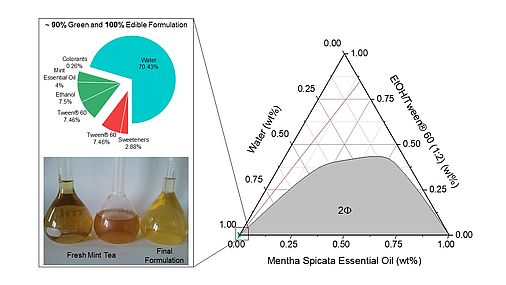 Mentha spicata L. disappears in winter. The lack of fresh mint during the cold season can be a limiting factor for the preparation of mint tea. A fresh taste source that can be kept during winter is mint essential oil. As the oil is not soluble in water, a food-approved, water-soluble essential oil microemulsion was studied, investigating different surfactants, in particular Tween® 60. The challenge was to dissolve an extremely hydrophobic essential oil in a homogeneous, stable, transparent, and spontaneously forming solution of exclusively edible additives without adulterating the original fresh taste of the mint. Making use of the microemulsions’ water and oil pseudo-phases, hydrophilic sweeteners and hydrophobic dyes could be incorporated to imitate mint leaf infusions aromatically and visually. The resulting formulation was a concentrate, consisting of ~90% green components, which could be diluted with water or tea to obtain a beverage with a pleasant minty taste. https://doi.org/10.1016/j.foodchem.2021.131230 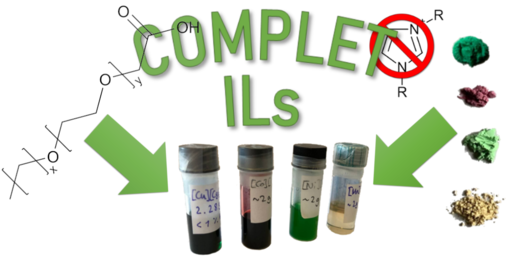 Most of the commonly used Ionic Liquids (ILs) contain bulky organic cations with suitable anions. With our COMPLET (Concept of Melting Point Lowering due to Ethoxylation), we follow a different approach. We use simple, low-toxic, cheap, and commercially available anions of thex type Cx(EO)yCH2COO– to liquefy presumably any simple metal ion, independently of its charge. In the simplest case, the cation can be sodium or lithium, but synthesis of Ionic Liquids is also possible with cations of higher valences such as transition or rare earth metals. Anions with longer alkyl chains are surface active and form surface active ionic liquids (SAILs), which combine properties of ionic and nonionic surfactants at room temperature. They show significant structuring even in their pure state, i.e., in the absence of water or any other added solvent. This approach offers new application domains that go far beyond the common real or hypothetical use of classical Ionic Liquids. Possible applications include the separation of rare earth metals, the use as interesting media for metal catalysis, or the synthesis of completely new materials (for example, in analogy to metal organic frameworks). https://doi.org/10.3390/molecules26134034

The molecule “γ-valerolactone“ (GVL)” can be readily synthesized from cellulosic biomass and could be used in a variety of commercial products, whilst having the potential to be even utilized in large-scale chemical processes. Additionally, it exhibits a very low toxicity towards aquatic environment and is readily biodegradable. These results were recently published in the leading journal for sustainable sciences “Green Chemistry” by the chair of Prof. Kunz in cooperation with researchers from TU Dresden. The article appeared on the cover of the respective issue and was featured for both the collection “2021 Hot Green Chemistry Articles” as well as the “Green Chemistry Editor’s Choice”. For the press release (in German), cf.: Link to press release. 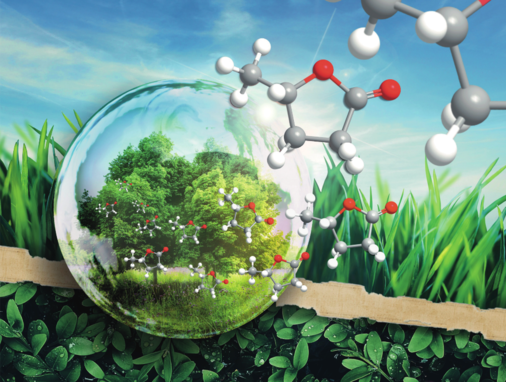 In the article, the ecotoxicity of GVL towards aquatic plants, bacteria, invertebrates, and a vertebrate cell line was concluded to be very low. The lactone was also shown to be completely biodegradable within a month. Further, the solvent properties of GVL were modelled based on Hansen Solubility Parameters, COSMO-RS calculations and existing literature about GVL to evaluate potential applications of this “green solvent”. As a result, GVL could be shown to represent a promising substitute for several highly polar, aprotic solvents, such as the reprotoxic compounds N-methyl-2-pyrrolidone (NMP) and dimethylformamide (DMF). It was concluded to be of interest as a sustainable and less toxic solvent in the manufacture of certain polymers or pharmaceuticals, as a cleaning agent in various paint and coating formulations, as well as a solubilizer in cosmetics, pharmaceuticals, or agrochemicals.

Based on the promising results, the chair of Prof. Kunz is currently working together with an industrial company to build a pilot plant with a capacity of 2000 tons/year. In case of a higher demand, the production could then be boosted up to several thousand tons per year.

those of you, who are interested in the lecture FORMULATION, please go in GRIPS to my "Lecture Formulation".

In the announcements, you can find further information and download the ZOOM-Link.

Meeting schedule for regular seminar on Wednesday at 17:00 p.m.:

Link only visible after login