Each year, one Regensburg-based doctoral researcher may spend up to five months as an IES Visiting Student Researcher as part of the program. IES offers Visiting Student Researchers a workspace, the opportunity to engage with its outstanding network of collaborating scholars, and access to library and research facilities offered by UC Berkeley. Visiting researchers are expected to participate actively in research-related events at IES. Information on applying to IES is available here. 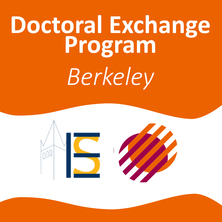 CITAS is pleased to invited applications for the doctoral exchange programme for the 2023/24 academic year. The deadline for applications is 30 November 2022. All applicants must be based at the University of Regensburg and/or IOS. You must still be a PhD researcher when completing your stay in Berkeley, i.e. you may not yet have submitted your doctoral thesis for assessment.

Please find the call for applications here in English and here in German.

In 2019/20, Verena Baier (American Studies, UR) visited Berkeley as part of the doctoral exchange program. She managed to conduct an impressive amount of archival research and field research on the Nicaraguan solidarity movement of the 1980s before her stay was disrupted by the COVID pandemic. You can read more about her experiences on the blog-journal of the ScienceCampus Frictions.

Eva-Maria Walther (Graduate School for East and Southeast European Studies, UR) received the award for 2020/21, but owing to the COVID pandemic could not travel to the US.

Franziska Mair (Comparative Cultural Studies, UR) travelled to Berkeley in September 2021 for a five month stay.

Marie Beyrich is the latest Regensburg PhD researcher to visit Berkeley. Based in the law faculty, she will be in Berkeley from summer 2022.

The Regensburg University Foundation funded visits for two visiting doctoral researchers in 2019. Their profiles are available below. We are pleased to be welcoming further researchers in 2022.

Noah Bender is spending June and July in at UR and IOS as a visiting researcher on the Berkeley-Regensburg Doctoral Exchange Program, supported by the Regensburger Universitätsstiftung. He will be collaborating closely with Ulf Brunnbauer while here and also looks forward to establishing contact with other colleagues and doctoral students.

In his talk, Noah Bender will discuss how German and international shipping companies were involved in the formation of the Hanseatic Colonization Society with the aim of facilitating recruitment of labourers to work on land purchased in southern Brazil. His research explores aspects of the competition over labour that emerged between German landlords back home and those seeking to establish the South American colonies. He also considers how such episodes reflect on the relationship between states, private companies and individuals as part of the formation of globalization and migration regimes. He argues that never simply neutral conduits of global interconnectivity, steamship lines indiscriminately fomented migration to countless destinations, which delivered profits far exceeding those on freight. Across Europe, meanwhile, the deluge of shipping agents and foreign recruiters provoked a backlash from commercial farmers, who had been buffeted by world markets and now faced a depleting labor force and rising wages. Simply put, even unskilled labor was a desperately sought commodity in a world awash in land and capital. From the First World War arose a wave of democratization across the globe, which led directly to immigration restrictions as the masses exerted unprecedented control over policy.

Noah Bender is a doctoral researcher at the University of California, Berkeley. He is a historian of 19th and 20th century Europe, with special focus on Britain, Germany, and the Habsburg Empire. His dissertation charts the rise and fall of shipping companies as conductors of the transatlantic emigration. He argues that the liberal international economy of the late nineteenth century, in which people circulated as easily as goods and capital, allowed new, vertically integrated shipping conglomerates to seize control of the Atlantic migration system. He is also interested in European agricultural history, and the political lobbying of the agricultural sector in particular. He graduated with a BA in history from Rochester in 2017 and an MA in the same subject from Berkeley in 2020.

The first doctoral researcher to visit this year is Blaze Joel, a doctoral candidate at UC Berkeley in History. He will be in Regensburg from 15 February to 31 March. His research focuses on nationalism, memory, violence, and national identity in twentieth-century Europe. He studies these issues in the successor states of the former Yugoslavia, Northern Ireland, and the Basque Country, as well as in an international, trans-European framework. 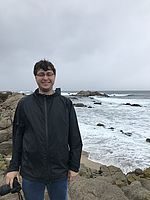 My dissertation explores the persistence of exclusivist perceptions of ethno-national identity through an examination of Croatia, Bosnia and Herzegovina, Northern Ireland, and the Basque Country. These four ethnically-mixed European societies experienced interethnic violence centering on the question of the state and the position of each respective group within it during the twentieth-century. Although the conflicts have ended, the legacy of the violence continues to define relations between the different communities. My project focuses on mobilizing events from the histories of the breakup of Yugoslavia, the Troubles, and the Spanish-Basque Conflict that had and continue to have salience through the commemorative cultures of the local communities today. Additionally, I am analyzing the roles of sport and education as institutions that mobilize and maintain the exclusivist identities of each community. My project integrates approaches used in historical, anthropological, and political science research in order to shed new insights on the roles of conflict, memory, commemoration, and institutions on social division and nation-building in divided societies.

Amélie’s stay in Regensburg allowed rapid progress on a collaborative chemistry research project involving the Tilley group at UC Berkeley and the Scheer group at Regensburg. This collaboration matches the longstanding interest of the Scheer group in phosphorous and arsenic chemistry with the Tilley group's focus on transition metal reactivity, and falls within Amélie’s thesis research on the synthesis and reactivity of novel copper-containing bimetallic complexes. This project’s initial phase, performed in Berkeley, yielded very promising results: Amélie’s bimetallic complexes react with adamantyl phosphaalkyne (a specialty phosphorus-containing chemical mailed to Berkeley by the Scheer group) and with white phosphorus (P4), to bind to a dicopper(I) core in a bridging fashion.

During her stay in Regensburg, Amélie was able to study the reactivity of her dicopper complexes with other phosphaalkynes, which was critical in determining how this class of compounds adopts different binding modes to copper in response to subtle structural differences. The phosphaalkynes she used for this study degrade rapidly at ambient temperatures, therefore performing experiments in Regensburg was key to the success of this project. Moreover, the Scheer group in Regensburg is one of the few groups in the world with the capability of synthesizing yellow arsenic (As4), a significantly less stable analogue to P4. Amélie was also able to gather preliminary results about the reactivity of As4 with her complexes, which show that arsenic binds to her dicopper core in a similar fashion to phosphorus.

The collaboration between the Scheer and Tilley group on this project is still ongoing. Visit of Scheer group members in Berkeley is planned for August and October 2019, and Prof. Scheer himself is coming to Berkeley in October 2019. Moreover, the results Amélie gathered during her stay in Regensburg will lead to two co-authored publications between Berkeley and Regensburg, expected for the 2019-2020 academic year.

After graduating from UC Berkeley and a year of studying German language and literature in Berlin, Amin completed his first master’s degree in Philosophy at Oxford University and his second master’s degree in Classics at Cambridge University. He then returned to Berkeley to pursue a joint JD-PhD degree at UC Berkeley School of
Law. After his stay in Regensburg, he will be a visiting PhD student at the University of Cambridge.

During his stay Amin worked most closely with Prof. Dr. Weyma Lübbe at the chair of practical philosophy. He also held a CITAS Brownbag Seminar where he discussed the intersections of law, ethics and machine learning in the global context.