Entangled Objects? The Material Culture of Diplomacy in Transcultural Processes of Negotiation in the 18th Century (2019-2022)

Indebted to a cultural approach to diplomatic history, the project examines the various forms, functions, and politico-legal semantics of objects in diplomatic interactions between representatives of early modern political entities that were perceived as highly different by contemporaries. Spanning the time from the end of the War of the Spanish Succession to the mid-1770s, the project moves in a period that witnessed the formation of modern diplomacy's set of rules in the context of emerging international systems. It was also a time, in which the process of European expansion brought European diplomatic actors increasingly into contact with non-European cultures with their own concepts of statehood, legal systems and rationales of object use.

The project draws on methods of Material Culture Studies and applies them to the fields of diplomacy, foreign policy, and international law in the early modern period. Thus, artifacts that were used in the course of transcultural diplomatic negotiations will be analyzed in terms of their complex materiality, their multi-functionality, their material worth, their practical uses, their quality as a resource of cultural meaning as well as in their role as agents of political and social relations. Taking the various manifestations of material culture as point of departure, the project aims for source-based pilot studies, which analyze the complex interplay of concepts of rulership, operational political interests, and the usage of diverse kinds of artifacts in specific material settings.

In sum, the project offers not only a profound understanding of individual cases of diplomatic of negotiations in different regional and transcultural contexts; it also bears the chance of critically assessing widely accepted theses about the rationalization, bureaucratization, regulation, 'Westernization', and globalization of diplomacy in the early modern period.

subproject 1: The Material Culture of Habsburg-Ottoman Diplomacy in the 18th Century

subproject 2: The Material Culture of British-Indigenous Diplomacy in North America in the 18th Century 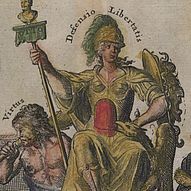