Thomas Steger is married and a father of two sons.

His research interests focus on corporate governance (especially boards of directors) and employee owned companies. Particular emphasis is placed on the transitional countries of Central and Eastern Europe. He continues to focus on the new challenges of work and organization design (e.g., digitalisieren, application of artificial intelligence).

Note: Source of publications listed on this website: http://epub.uni-regensburg.de/. This listing does not necessarily list all publications of this institution or person. 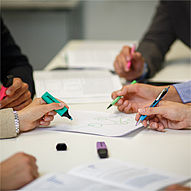