Research associate at the Department of Pharmaceutical Technology

The following list is a selection of all publications of apl. Prof. Dr. Miriam Breunig (articles, book chapters, theses and patents published 2008 and later). You can find the full publication list on the publication server of the University.

A plethora of highly potent drugs suffers from poor stability in plasma and tissue, an insufficient permeation of biological barriers and last but not least, a poor selectivity for target cells. Consequently, their availability at the intended site of action is dramatically limited. Examples for such drugs are nucleic acids and proteins, but also a number of substances of low molecular weight. To increase their availability at the site of action, we develop drug delivery systems at the nano- and microscale range for local and systemic application. We explore fundamental principles of drug delivery at the molecular level to bring drugs with high specificity to their site of action, to avoid unspecific binding to non-target structures and to release them in a controlled manner. For example, the drug delivery systems are applied for glaucoma therapy and the development of an HIV-1 vaccine, respectively.

Primary open angle glaucoma is a neurodegenerative disease of the optic nerve.1 It is the second leading cause of blindness worldwide and in 2020 more than 76 million people will be affected.2 Decisive events of glaucoma onset and progression are located in the anterior chamber of the eye. Here, the outflow of aqueous humor through the trabecular meshwork and Schlemm´s canal is severely impeded.3 Conventional treatment with topical eye drops is more or less successful and, particularly important, standard drugs do not fundamentally treat the root cause of the disease. Connective tissue growth factor (CTGF) that is produced by cells of the trabecular meshwork and Schlemm´s canal, was identified as a major mediator of pathological effects associated with glaucoma.4 Therefore, the goal of the project is to restore the vital function of cells of the trabecular meshwork and Schlemm´s canal and (i) interfere with their increased CTGF production or (ii) block the intracellular effects of CTGF. 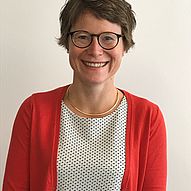