The city of Rome does not feature prominently in the Bible; nevertheless,
it developed a nuanced memorial landscape in Christian Late Antiquity.
The Eternal City derived its lasting importance for the new and increasingly
dominant religion not only from its political role as capital of the Roman
empire, but also from the ideological significance of the martyrdom of the
Princes of the Apostles. While, however, the narrative about Paul in the
canonical Acts of the Apostles ends in the Roman capital, only extra-canonical
traditions tell us about the later life and final fate of Peter. All the
more prolific was speculation “Beyond the Canon”: legends, memorial
traditions, and cult blossomed, producing a rich apocryphal literature of
various genres, a wealth of monuments that stand out to this day, and a
stational liturgy which eventually was to shape the wor-ship of the whole
Latin West.

The envisaged Summer School will explore the stupendous importance of
extra-canonical traditions and the complex interplay between texts, rituals,
and material culture in the formation and development of the Christian
memorial landscape in late antique Rome. It shall investigate the literary
heritage of extra-canonical writings, trace their influence in archaeology,
iconography, and art, and explore how they reverberate even in the Roman
liturgy, which, on its surface, appears extremely biblical. Although the
primary focus will be on Late Antiquity, the long-term reception history in
later periods with their magnificent rituals, art, and architecture will not be
neglected.

We shall spend ca. half of the time in the classroom and half of the time
on-site, visiting the monuments. Lectures by the instructors, common reading
of extracts from key sources, and contributions by the participants will
alternate with and be informed by visits to outstanding monuments, some
of which are not regularly open to the wider public. Instruction language
will be English.

Participants are expected to contribute a short paper, an introduction to an extract of a pertinent source or a discussion of a relevant monument or a liturgical ritual; they will be issued a certificate of attendance and may earn 4 ECTS credit points.The summer school is designed for 12–15 doctoral candidates or early career researchers, who will be selected by the board of organisers in view of their closeness to the interdisciplinary topic.The Regensburg Centre for Advanced Studies and the Koninklijk Neder-lands Instituut Rome will cover accommodation, entrance fees and tuition, and it will subsidise travels with up to 300 Euro; meals and other occasional expenses will be on account of the participants.

Applications should be made in German or English to the academic coor-dinator of the Regensburg Centre for Advanced Studies “Beyond Canon_”, Dr. Stephanie Hallinger (stephanie.hallinger@ur.de) with a single .pdf that includes:

Application deadline is 31 December 2020; applicants will be informed about the decision by 31 January 2021. 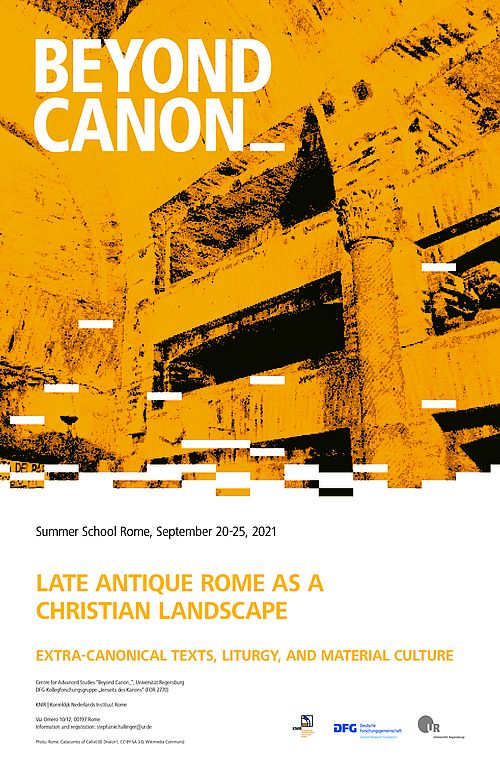