The Chair of Ancient History is part of the Centre for Classical Studies.

The Centre for Classical Studies is a cross-faculty institution of the University of Regensburg.

It is well known that the culture of the so-called Western world is strongly influenced by the model of classical antiquity. The extent to which the return to traditions of classical antiquity as a frame of reference has influenced and accompanied the emergence of the Western world throughout history becomes particularly evident in periods of upheaval, when political and cultural changes were influenced and interpreted by the recourse to the ancient past. Examples are the founding of the Frankish Empire by Charlemagne, the culture of the Renaissance, the scientific revolution of the 17th century and the diverse and ground-breaking upheavals of the later 18th century and the early 19th century (Enlightenment; French Revolution; bourgeois culture of the 19th century). The Centre for Classical Studies, a cross-faculty institution at the University of Regensburg, is dedicated to researching such connections between ancient and modern civilisations. By pooling the competences of different disciplines in research and teaching, questions about the characteristics of the ancient cultures of Greece and Rome are investigated to the same extent as the significance of these ancient traditions as models for the genesis of today's Western-style cultures. With this bipolar, mutually complementary approach, the Centre for Classical Studies is a unique institution within the German university landscape. 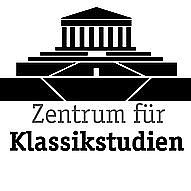 Homepage of the Centre for Classical Studies