Research project at the Chair of Ancient History that lead to the reconstruction of a Roman warship.

to the project homepage.

Please note for enquiries: Our secretary Ms Marion Pinkawa can be reached by telephone on Tuesdays, Wednesdays and Thursdays 08:30 - 12:00 am. The project coordinator Dr. Heinrich Konen is on holiday until mid-September 2022.

On 1 August 2004, the 'Regina', the first floatable replica of an ancient river warship, was launched. It is thus the pioneer and forerunner in the practical research of Roman military navigation on the Rhine and Danube and today still a much visited and respected flagship of the University of Regensburg and the Department of Ancient History. Another outstanding feature is that the construction, which was completed within a year, is largely the work of students from the Faculty of Philosophy. The vehicle, probably representing the late antique ship type 'Navis Lusoria', has been subjected to a series of scientific investigations in recent years. The results from these investigations have contributed to a number of new insights into the function, structure and significance of the late antique Roman river fleets on the Rhine and Danube border rivers. 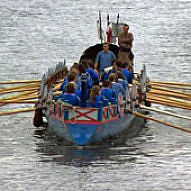