Psychopathologies are amongst the leading causes of disease and disability worldwide. In particular, anxiety- and depression-related disorders, which are characterized not only by severe emotional, but also by social dysfunctions, are among the most common psychiatric illnesses with life time prevalence of about 30% and 19%, respectively. These numbers reflect a large socio-economic burden and emphasize the importance of developing specific, predictable and efficient treatment options based on increased understanding of underlying neurobiological mechanisms.

The GRK “Neurobiology of Emotion Dysfunction” aims to substantially bundle research efforts at UR to reveal important mechanisms at molecular, cellular (including neuronal and glial), neuroendocrine and behavioural levels, which are likely to contribute to psychopathologies with particular focus on dysfunctions in anxiety- and depression-related behaviour, social and non-social fear and associated social deficits.

Understanding the plasticity of glia-neuron interactions in emotional dysfunctions 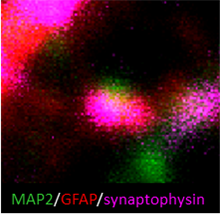 A2: Activation of microglia after pair bond disruption

Positive social relationships are vital for mental and physical health. Hence, their sudden disruption result in emotional distress often leading to symptoms of depression. Using the animal model of the monogamous prairie vole (Microtus ochrogaster), which forms selective, enduring pair bonds, we study the behavioural, emotional and neuroendocrine consequences of partner loss. Intriguingly, separation from the pair-bonded female partner leads to chronic stress and increased passive stress-coping, indicative of depressive-like behaviour. The latter is mediated by increased activity of the brain corticotropin-releasing factor (CRF) system, which in turn supresses the oxytocin signalling especially in the nucleus accumbens shell. Our studies aim to investigate potential treatments for enhancing the central oxytocin signaling to reverse separation-induced distress. Furthermore, we plan to investigate the neuro-immunological consequences of partner loss from the male but also the female perspective. The experiments will include in-depth, brain site-specific characterisation of microgila activity under basal conditions and acute stressor exposure.

The neurobiology behind bond disruptions: When a mother loses her child

The first bond in life forms between a newborn and its mother. She nurses the baby and cares for it. This ensures the healthy physiological and psychological development of the child. Consequently, disruption of the bond can have long-lasting effects on the child as we have learned from human and animal research. However, the effects on the mother have hardly been studied and the neurobiological mechanisms are almost unknown, despite the fact that the mother might develop depressive symptoms. Therefore, we aim to investigate in animal models the neurobiological basis underlying the emotional changes resulting from losing the young. To reach our goal, we will apply a variety of techniques including behavioral characterizations, intracerebral microdialysis, acute / chronic application of receptor (ant-)agonists, immunohistochemistry, and receptor autoradiography.

Project (present/future): In contrast to neurons, little is known about the intracellular and behavioral consequences of glial oxytocin (OXT) receptor signaling. Therefore, this project focuses on OXT-induced changes gene expression, cytoskeletal dynamics, as well as signaling cascades in astrocytes. Moreover, we are interested to reveal to which extent astrocytes, which express the OXT receptor, contribute to the effects of OXT on various aspects of socio-emotional behaviours such as anxiety, social fear, social preference behaviour, aggression or stress coping within distinct brain regions.

The PhD student will acquire and apply the following methods:

Neuronal plasticity is the basis of mammalian learning and memory, with the dynamic actin cytoskeleton and associated motor proteins as essential mediators of plastic change. Proteins such as Spir actin nucleators and formins cooperate in generating actin filaments at vesicle membranes, which serve as tracks for vesicle transport processes. Transgenic mouse models revealed a function of both Spir-1 and formin-2 actin nucleators in emotional fear learning. Molecular protein interaction studies at the Kerkhoff lab show that Spir actin nucleators interact with myosin V actin motor proteins, which function in postsynaptic AMPA receptor transport. By combining expertises on protein complexes and vesicle transport on the one side (Kerkhoff) and neuronal subcellular signaling on the other side (Egger) we aim to unravel a function of the Spir/formin actin nucleator complex in plasticity of neuronal signaling in the limbic system. 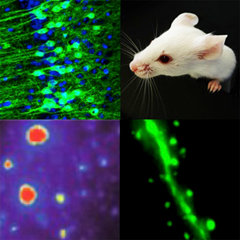 A5: Role of coding and non-coding RNAs in socio-emotional behavior

The role of coding and non-coding RNAs in socio-emotional behaviour:
Identification and characterization of RNAs and their downstream signalling

In the last decades, the research field on RNAs developed dramatically, and the role of different types of RNAs in psychopathologies became obvious. Non-coding RNAs are highly expressed in the brain but their involvement in various aspects of socio-emotional behaviour is still unknown.

In this project, we want to characterize social fear with the focus on RNA diversity: we want to assess the involvement of coding and non-coding RNAs in social fear acquisition and its extinction using a novel mouse model of social fear conditioning (SFC). To this end, we will identify, validate and characterize RNAs, which are regulated within distinct brain regions during the SFC paradigm. The final aim is to reveal the role of coding and non-coding RNAs in in the regulation of fear acquisition, memory formation and consolidation, and fear extinction. 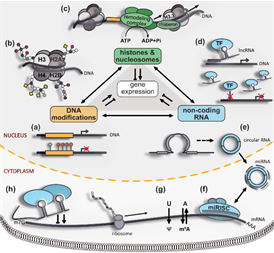 B5: Oxytocin signalling in the rodent olfactory bulb

Oxytocin receptors (OXTR) are widely expressed within the rat and mouse olfactory bulb, but their role in olfaction is not yet known.

Preliminary data indicate that OXTRs are present on local interneurons, even though there are no direct oxytocinergic projections into the bulb.

Effects of OXT will be studied in detail with electrophysiological whole-cell recordings from OXTR+ and OXTR- neurons, high-resolution imaging and uncaging techniques.

Identifying somebody's emotional states from brain activity is an important task for developing brain-based biomarkers of emotions (such as joy, but also fear, anxiety, sadness, anger, and disgust) that one can use in basic research on emotional processing as well as in clinical research in order to improve diagnostics and interventions diagnostics. The main goal of this project is to identify emotional states based on functional Magnetic Resonance Imaging (fMRI) using machine learning approaches such as statistical classifiers and deep neural networks.

A7: Role of oxytocin in social fear: involvement of sexual activity

Role of oxytocin in social fear: involvement of sexual activity

The neuropeptide oxytocin (OXT) is well known to exert anxiolytic, anti-stress and pro-social effects. Whereas in females, lactation has been repeatedly been used as a model to study the involvement of the endogenous OXT system, activation of the brain OXT system and intracerebral OXT release also occurs during mating and sexual stimulation in males.

In this project, we want to assess the involvement of mating-induced release of OXT in the context of social fear conditioning, but also in non-social fear conditioning (e.g. cued fear) and anxiety in mice. After characterizing the effect of mating on fear and anxiety, we aim to identify the neuronal circuit underlying this effect by modulating the OXT system directly within targeted brain region like the lateral septum or the central amygdala.

B7: Role of septal oxytocin and CRF signalling in social fear in mice

Social anxiety disorder (SAD) is the 2nd most prevalent anxiety disorder and is characterized by intense fear and avoidance of social situations. The lack of understanding of specific underlying neuronal mechanisms prevents the development of effective therapeutic strategies. Using our established social fear conditioning (SFC) paradigm, which generates robust fear and avoidance of conspecifics in male and female mice, we have identified the lateral septum (LS) as a key brain structure where OXT acts to reverse social fear in males and females, and where the OXT system undergoes alterations during SFC. However, despite our growing knowledge, the precise biochemical nature and downstream targets of OXTR-expressing neurons within the LS, which mediate the social fear reversing effects of OXT, remain unknown.

TSPO is supposed to play an important role in different mitochondrial functions. Dysregulation of such mitochondrial functions is involved in the pathophysiology of several psychiatric diseases, such as major depressive disorder (MDD). However, little is known about these TSPO functions during the process of specific therapies, such as electroconvulsive therapy (ECT). The aim of this project is to investigate the functional role of TSPO during ECT in depressed patients with specific regard to functional brain connectivityand its dynamics.

State of the art: Numerous studies report associations between single nucleotide polymorphisms (SNPs) in the oxytocin receptor (OXTR) gene and emotional dysfunctions, such as autism, schizophrenia, or anxiety disorders. Despite the interest in oxytocin as potential treatment, the underlying intracellular or genetic mechanisms remain elusive. We have studied OXTR-coupled signaling cascades and hypothesize that those cascades are altered in function or general activity by OXTR SNPs. In addition, we explored downstream genetic effects, such as alternative splicing of stress-and anxiety-related target genes and altered mRNA translation that provide first insight into the intracellular effects of oxytocin and might explain the behavioral effects of oxytocin.
Objectives and Research Plan: The aim of this project is to understand the molecular OXTR-coupled mechanisms that underlie the behavioral effects of oxytocin, in particular its anxiolytic and anti-stress effects. To this end, we will further analyze the intracellular pathways that signal from the OXTR to cytoplasmic or nuclear targets and alter cellular excitability, morphology, or gene expression in cell culture. In particular, we will focus on the activation of signaling cascades, subsequent regulation of gene expression by alternative splicing, and the resulting effects on cellular morphology and animal behavior. Several state-of-the-art research techniques, such as CRISPR-Cas9, Gapmer-mediated in vivo knock down, ChIP-Seq, IHC, primary and immortalized cell culture, as well as several behavioral tests for anxiety-like behavior in rats are available in our lab and will be used throughout the project.

With the collected data, in combination with the analysis of de novo protein synthesis induced by OXT (P5), I aim to draw a more complex picture of how the above described cellular/molecular processes combine synergistically in a relevant behavioural context (P7).
In this way, P9 is particularly embedded into the GRK Research Structure and profits from its many possible links to, and methodological options provided by, other projects. 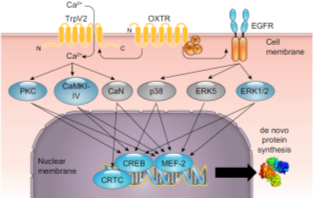 B9: Acute and longterm consequences of social stress in adolescent mice

Effects of social stress in adolescence on brain neuropeptides

State of the Art: The experience of social trauma and violence, during childhood and adolescence has a major impact on mental health and socio‐emotional behavior in adulthood. However, detailed underlying molecular mechanism are largely unknown. Utilizing the established mouse model of social fear conditioning (SFC), which generates robust fear and avoidance of conspecifics in male and female mice, I aim to investigate the acute and long-term impact of social trauma experienced in adolescence on social and emotional behaviors and on brain neuropeptide systems. The neuropeptide oxytocin (OXT) is particularly relevant in this context, as (i) OXT exerts pro‐social, anxiolytic, and anti‐stress effects in rodents and humans, and (ii) social stress is known to affect the OXT system in adult mice and rats.

Objectives and Research Plan: I will study the acute and long‐term consequences of exposure to SFC during adolescence on anxiety- and depression-related as well as social preference behaviors in rodents. In parallel, I will analyze the expression of OXT and its receptors in relevant limbic brain regions in adolescent and adult SFC mice and their controls. We will further pharmacologically and virally manipulate the activity of the OXT system to study the influence on socio-emotional behavior after social trauma in adolescence.

Major depressive disorder (MDD) is a severe mental disorder affecting 350 million people worldwide. The molecular mechanisms underlying the cause and the progress of this complex disease are still not completely understood. To search for and characterize molecular pathomechanisms associated with MDD, we use skin fibroblasts as well as induced pluripotent stem cells and induced neurons (iNeurons), which were derived and reprogrammed from depressed patients or healthy controls. By comparing functional parameters in depressed vs. control iNeurons, we investigate the bioenergetic capacity, intracellular signaling pathways, and neuronal communication by means of respirometry and live cell imaging (calcium imaging, voltage-sensitive dyes), as well as molecular, pharmacological and electrophysiological (patch-clamp) approaches.

The function and pathophysiology of mitochondrial proteins as well as their role in emotional dysfunction is an important aspect this project. 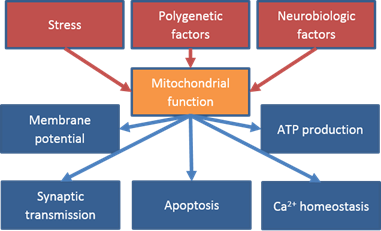 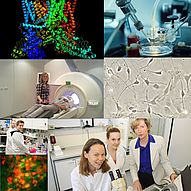