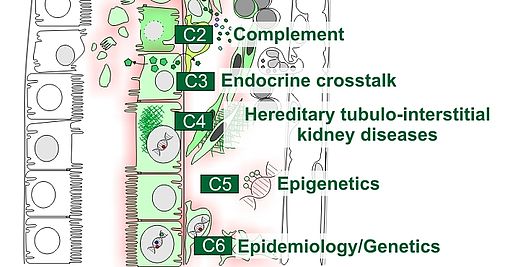 In this project, we will comprehensively characterize the activation of the complement pathway, in particular of the lectin pathway, during renal transplantation, with specific focus on the crosstalk of renal tubular epithelial cells and inflammatory cells. For this, we will use human renal biopsies and renal tissue from experimental studies in rats. Using either an inhibitory antibody directed against the activator of the lectin-activated complement pathway MASP-2, or a C5-blocker inhibiting the terminal route of all complement pathways, we aim to target complement activation to prevent graft deterioration and graft loss. In addition, interaction of various complement factors with renal tubular cells will be investigated in vitro.

The kidneys are important endocrine organs. In addition to specialized endocrine cells, tubular cells also release autacoids and hormones, which act on adjacent cells of the tubules and the interstitium and thus influence kidney function. Our project aims at a better understanding of the regulation of tubular hormones and of their functional importance in the healthy and diseased kidney. Based on preliminary data, we will focus on the local, tubular renin-angiotensin system and tubular natriuretic peptides. Moreover, new tubular hormones, autacoids and metabolites will be identified and their functional significance will be clarified.

The most frequent form of ADTKD is caused by a specific frameshift mutation of the mucin 1 gene. Since the molecular consequences of this mutation leading to disease are unknown, our project intends to identify binding partners and study cellular effects of the frameshift mucin 1 protein in immortalized and primary tubular cells of affected patients. Kidney biopsies from ADTKD patients with different disease subforms will be studied by immunodetection and electron microscopy, in order to identify similarities but also differences. Finally, we will generate a mouse model that will induce an unfolded protein response (UPR) in the distal tubules, which may be a unifying feature of all subforms of ADTKD. This mouse model will be valuable to analyze pathomechanisms and investigate effects of drugs to inhibit UPR.

Epigenetic identity and plasticity of renal tubular and interstitial cells

Disturbances in the homeostasis of kidney function, e.g. driven by hypoxic insults in acute or chronic kidney diseases, may lead to an epigenetic re-programing of transcriptional responses and cellular function. Hypoxia-inducible transcription factors (HIF) dictate expression of genes which are directly involved in modifying DNA or histone proteins, and activity of some of the chromatin modifying enzymes is dependent on the presence of oxygen. This project assesses the influence of hypoxia and HIF-stabilization on epigenetic factors in the normal kidney as well as during acute kidney injury.

Genome-wide association studies (GWAS) and their meta-analyses (GWAMAs) are among the most successful approaches to identify genetic factors for multi-factorial diseases. Our overarching aim is the identification and characterization of the genetics of kidney function decline in general populations and high risk subgroups. Moreover, we will develop a systematic approach to join various kinds of information on “kidney genes” (e.g. condition- and disease-dependent gene and protein expression, pathways and regulation) into a tool for GenePrioritiSation (GPS). This web-based searchable GPS tool will provide a comprehensive body of information to researchers of CRC 1350 and to the public.