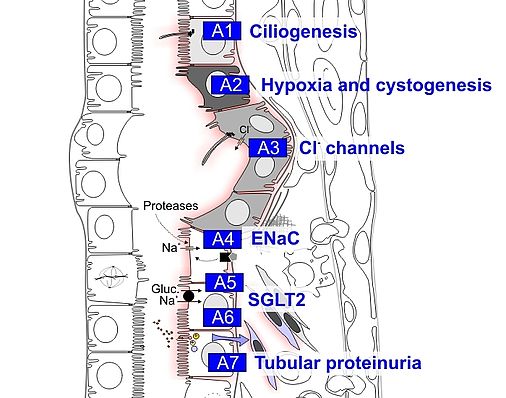 Defects in primary cilia, singular extensions of almost all mammalian cell types, give rise to a wide variety of genetic diseases, including cystic kidney disease. Despite their great importance, it is virtually unknown by what mechanisms primary cilia are formed. Our own preliminary data provide sound evidence that endocytosed plasma membrane accounts for the early stages of ciliogenesis. In order to better understand this process, the underlying form of endocytosis and the intracellular trafficking pathway from the plasma membrane to the centrosome will be characterized in detail.

Autosomal Dominant Polycystic Kidney Disease (ADPKD) is characterized by continuous cyst growth due to fluid secretion into the cyst lumen. Our preliminary work indicates that ATP-dependent, Ca2+-activated Cl- secretion as well as HIF-1α and ROS signaling contribute to this fluid transport. Here, we will test if cyst progression can be slowed down by pharmacological inhibition of these pathways. In addition, we will analyze the mechanism leading to luminal ATP release and its effect on cyst enlargement. The expected results will help to understand the underlying mechanisms of continuous cyst expansion in ADPKD and to identify applicable drug targets to inhibit cyst growth and preserve renal function.

CFTR and TMEM16A/F in polycystic kidney disease and metabolic alkalosis

CFTR and TMEM16A/F are chloride ion channels that are strongly expressed in the kidney. Their function in the kidney remains poorly understood. In this project, we use genetically modified mouse models to investigate the role of CFTR and TMEM16A/F for renal cyst formation as well as the signaling pathways involved. Moreover, we will explore the importance of CFTR, TMEM16A, and SLC26A4 (pendrin) during metabolic alkalosis in vivo using kidney-specific CFTR, TMEM16A/F, and SLC26A4 knockout mice. The expected results should provide important hints to the role of these Cl- channels in the formation of renal cysts and metabolic alkalosis in cystic fibrosis.

The appropriate regulation of the epithelial sodium channel (ENaC) in the distal nephron is essential for the fine-tuning of renal sodium excretion. In addition to tubular proteases activating ENaC by proteolytic channel cleavage, interstitial proteases may modulate ENaC activity by activating the basolateral protease-activated receptor type 2 (PAR2). This project combines electrophysiological and molecular biological methods to identify tubular proteases relevant for proteolytic ENaC activation and to investigate the molecular mechanisms involved. Moreover, the underlying mechanisms and signaling pathways of PAR2-mediated ENaC regulation by interstitial proteases will be elucidated.

Molecular mechanisms of transport and inhibition in SGLTs

The sodium-dependent glucose transporter 2 (SGLT2) is responsible for 90% of renal glucose absorption and its inhibition has a high clinical relevance. However, the molecular structure of this transporter is yet unknown. In this project, we will investigate the atomic structure of SGLT2 in complex with its substrates and inhibitors by high-resolution cryo-EM and additional state-of-the-art methods. In combination with functional, spectroscopic, and computational studies, we aim to provide a molecular description of sodium coupling, substrate sensing, substrate-dependent regulation, and inhibition of SGLT2 glucose transport in the proximal tubule.

Empagliflozin, a selective inhibitor of the sodium-dependent glucose transporter 2 (SGLT2) in the renal proximal tubules, has been shown to reduce the rate of incident or worsening nephropathy, hospitalization for heart failure, and mortality but the mechanisms are unclear. We will investigate the role of tubular SGLT2 on hyperfiltration-dependent renal damage and will test if empagliflozin exerts cardiac protective effects on cardiac sodium homeostasis, contractility and arrhythmias by inhibition of cardiac SGLT2 or Na+/H+ exchanger 1 (NHE1) in afterload-induced heart failure. Importantly, we will also test whether the beneficial effect of empagliflozin on the kidney may be transferred to the heart and vice versa.

The project deals with a previously unknown autosomal recessive disease, in which a mutation in the gene of the "vesicle-associated protein" (VAP) leads to reduced protein uptake in the proximal tubule and to “low-molecular-weight” proteinuria. The role of VAP in the kidney is unknown and will be investigated with the help of genetically modified mice and cell models. The expected results will contribute to a better understanding of protein resorption in the kidney and provide insights into the pathogenesis and tubular signaling in this unknown disease.