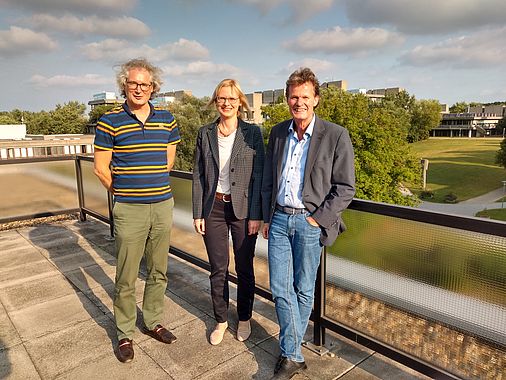 Dr. Gerlinde Groitl was a founding member of the CITAS Board from 2017 to March 2019.

CITAS is led by the three-person Executive Board (Vorstand) and advised by the eight-person Academic Advisory Board (Beirat). Both groups include experts from the various disciplines and regions contributing to CITAS, as well as both professors and early career researchers.

The role of the Executive Board includes developing a working programme, a development plan, approving the finance plan and appointing personnel to CITAS. The Academic Advisory Board represents the broad range of disciplines, regions and institutions associated with CITAS. It advises the Executive Board and Manager of CITAS, commenting on its ongoing work and future plans.

The members of both structures are introduced below.

Her full CV and publications list is available here.

Our specialist for Eastern and South-Eastern Europe, and History

His full CV and publications list is available (in German).

Our specialist for Western and Southern Europe, and for Literary and Cultural Studies

Jochen Mecke has been Professor for Romance Philology at the University of Regensburg since 1996. He completed his Habilitation at the University of Heidelberg and his PhD at Mannheim. His research focuses on Spanish and French literature, film and culture. He is director of Forschungszentrum Spanien (Research Centre on Spain) in Regensburg and is currently speaker of the CITAS Executive Board until December 2018.

His full CV and publications list is available (in German).

Ger Duijzings is Professor of Social Anthropology, specializing in Southeast and Eastern Europe at the Institute of History in Regensburg. He is a principal investigator at the Graduate School for East and Southeast European Studies (GSOSES). His research focuses on urban studies, memory and violence, indentity, religion and politics from an anthropological perspective.

Harriet Rudolph is Professor of Modern History (Early Modern Era) at the Faculty of Philosophy, Art, History and Humanities at the University of Regensburg. Her research focuses on political cultures in Europe, media history, cultures of festivities and celebrations, and on legal history.

Volker Depkat has been Professor of American Studies in Regensburg since 2005.  His research focus lies in US and North American history, including European-American connections. He has also worked on life writing and is developing a book on the history of the notion of US "exceptionalism".

Alexander Graser holds the Chair of Public Law and Policy, with a focus on European, International and Comparative Law. He received his habilitation and doctoral degrees from LMU in Munich, and has also studied at Harvard Law School and is a fellow at Hertie School of Governance in Berlin. He has been involved in numerous area studies initiatives at UR, including Europaeum and the Graduate School. His research explores aspects of law in comparative contexts, with his work addressing regions including the EU, Eastern Europe, North America, and Asia.

Jürgen Jerger is Head of the Department of International and Monetary Economics at the Faculty of Economics and was a principal investigator at the Leibniz Institute for East and Southeast European Research in Regensburg. He is currently Dean of the Faculty of Economics. His research interests are International Economics, Monetary Economics and Labor Markets, with his approach offering a global perspective. He has also be associated with the Institute of East and Southeast European Studies (IOS).

Ralf Junkerjürgen is Professor of Romance Culture (France/Spain) and Dean of Studies in the Faculty of Languages, Literature and Cultures in Regensburg. His research focuses on nineteenth and twentieth-century literature and culture, Spanish film and popular culture, and the cultural history of the human body.

Ursula Regener is professor of Modern German Literature at the Institute of German Studies in Regensburg. Her research focuses on German Romanticism in its regional, national and international contexts. She has conducted extensive research on Joseph von Eichendorff. Prof. Dr. Regener is currently the University's women's representative.

Cindy Wittke graduated in international law and currently leads the Research Group on  "Frozen and Unfrozen Conflicts“ at the Institute for East and Southeast European Studies (IOS) where she is working on several projects, including an exploration of international law in the post-Soviet space.

Thorsten Kingreen holds the chair of Public, Social and Health Law at the Faculty of Law at the University of Regensburg. His wide-ranging research interests include European Community Law as well as social, health and medical law. He was a member of the CITAS board from October 2018 to October 2020.

Gerlinde Groitl is a lecturer in International Policy and Transatlantic Relations at the University of Regensburg where she also gained her PhD. She has also been a researcher at Johns Hopkins University in Washington and at the London School of Economics and Political Science (LSE). Her research focuses on US-European and US-German relations, exploring questions of interventionism, world orders and security policy.

Her full CV and publications list is available (in German).

Master's Student in Intercultural European Studies. Jelena left to study in Madrid as part of her dual degree.

Master's Student since October 2020 in Conflict, Memory and Peace at the Catholic University of Eichstätt-Ingolstadt