Webinar: Petrus Wilhelmi and Central-European Music in the 15th Century

Petrus Wilhelmi de Grudencz (1392‒after 1452) figures as a side note in contemporary historiography. He does not fit either into its mainstream, focused on describing the most important composers, centres and musical styles of the fifteenth century, or into national historiographies. He cannot be squeezed into the frameworks of “the history of Polish music” or “the history of music in the Bohemian lands”, but it is also difficult to apply to his music the same criteria as in the case of Du Fay’s motets or Binchois’s chansons. One of the keys to understanding and properly evaluating Petrus Wilhelmi is the concept of Central Europe: his biography, the sources of his works, and the musical genres he employed, all point in that direction. At the same time we need to apply to this region a definition that is different from that applied to Europe after World War 2: it includes German lands (southern and central Germany, Austria, Tyrol), as well as the territories of the old kingdoms of Poland, Bohemia, Hungary and the Teutonic Order state in Prussia (where Petrus came from).

During this seminar we would like to consider the contemporary historiography of the music of the late Middle Ages. Does the use of such terms as “Eastern Europe” (in relation to Poland or Czech Republic) or “Central-Eastern Europe” make any sense here? In our interpretations, don’t we sometimes fall into the “post-Yalta syndrome”, artificially separating the culture of Bohemia, Silesia and Hungary from the culture of Austria, Saxony and Bavaria? To what extent is the regional perspective relevant to describing musical developments, and does not that also carry various traps and dangers of over-interpretation? The ground for this discussion has been laid by Paweł Gancarczyk’s book, published in Warsaw in July 2021. He will present its main theses in relation to selected examples of the music of Petrus Wilhelmi as well as results of the latest research.

Paweł Gancarczyk, “Memory of Genre: The Polytextual Motet in Central Europe and its Two Traditions”, in Sounding the Past: Music as History and Memory, ed. Karl Kügle (Turnhout: Brepols, 2020), 141–155.

Petrus Wilhelmi and Central-European Music in the 15th Century 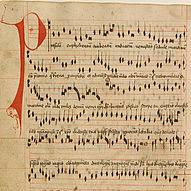